A demonstration of power

I don't know about you, but I need regular reminders of the power of God. Michael Sanders is in Kenya and gives us a modern day reminder that what Paul said to the Corinthians – "My message was with a demonstration of power" – is still true today. He lay in a coma.  There wa…
By Seth Barnes
05 November 2012, 12:11 am
By Seth Barnes
05 November 2012, 12:11 am

I don't know about you, but I need regular reminders of the power of God. Michael Sanders is in Kenya and gives us a modern day reminder that what Paul said to the Corinthians – "My message was with a demonstration of power" – is still true today. 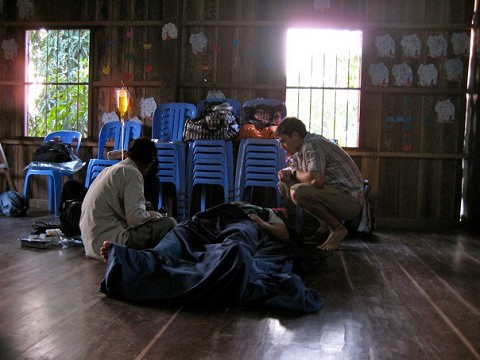 He lay in a coma.  There was a tube connected through his nose that was sucking the poison out of his body.  On the floor was a bag filling with the poison, a thick green substance.  He was as good as dead.

It was my first time visiting the hospital here in Busia.  All my senses were hit with the sound and smell and taste and touch of sickness and death.  It was as thick in the place as a cloud of smoke that rises up out of the kitchen after you’ve burnt yet another dinner.

He lay there motionless, unresponsive to any of our prayers, and yet…  we couldn’t stop praying.  We prayed for about 15 minutes, and our translator was ready to move on to the next bed.  Andy and I made eye contact, and we both knew – our work wasn’t finished.  We continued to pray passionately for this man to come back to life for over an hour.  As we prayed, our prayers became more and more bold, and faith was shooting up and out the ceiling.  One by one, others members of the team walked over to the bed side and began praying fervently.  I prayed for an ‘open heaven’ over him, and that God would rain down healing upon him.

Soon there were about 15 people surrounding Michael’s bedside, most from our team but also some people who were in the hospital joined us in our efforts.  We began to worship God loudly and openly in that ward, and people all around began to pray.  Suddenly the wind picked up outside until the windows were shaking.  People rushed over to close the windows as the storm quickly developed all around the hospital.  Soon it was down pouring rain and the wind was shaking the building.  We sang louder, we prayed with more boldness, and continued our efforts.  I kept calling out to him, “Come alive!  Come alive!”  After another 30 minutes, we said our final amen.

Ashley and Andy were in tears and didn’t want to leave the bedside, almost out of fear that they would return to hear of Michael’s death.  What do you do when you spend it all in prayer and God doesn’t show up?  How do you cope with that?  I just smiled, and told them it was time to go.  Something inside me just knew he would come back to life, and I knew it wasn’t going to take long.

Sure enough, our team went back the following day and Michael was out of his coma!  He came back to life!  The poison left his body (just as we commanded it to in the name of Jesus) and he was able to speak with the team about his experience.  He told them that he didn’t hear the prayers, but that he felt them!  He was going through intense spiritual warfare, and the enemy wanted him dead.  I remember while praying for him the night before, hearing these voices saying over and over “He’s gonna die, He’s gonna die!”  Jesus kept saying “He’s my son, He’s gonna live!” and so I took Jesus’ side 😉

The second day at the hospital they ministered to Michael, cast some demons out of him, and then he gave his life to Jesus!

SO much faith rose in that place that everywhere the team looked people were praying and worshiping God.  The Holy Spirit exploded in that hospital!  Patients with arms raised to heaven, on their knees, family members on their faces before God.  One bed-ridden woman who hadn’t walked in over a month proclaimed faith in Jesus and got up and walked!  The nurses told the team that many people were released to go home the day after we came and prayed!