We are approaching a season of graduations. Bill Gates, the richest man in the world, had the chance to share his best advice at the school he dropped out of, Harvard. His advice was basically: “To whom much is given, much is required. You have a lot, so give back – help those who are living i…
By Seth Barnes
20 April 2017, 12:04 am
By Seth Barnes
20 April 2017, 12:04 am 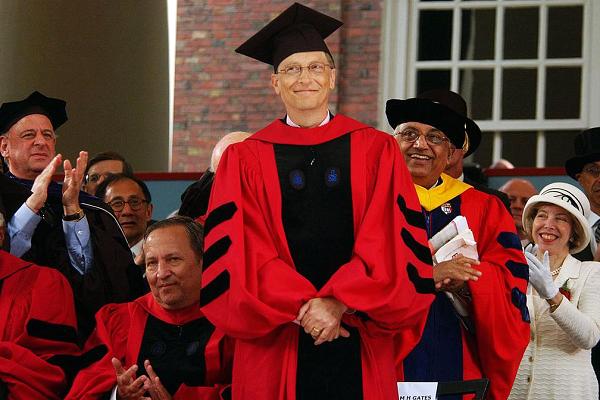 We are approaching a season of graduations. Bill Gates, the richest man in the world, had the chance to share his best advice at the school he dropped out of, Harvard.

His advice was basically: “To whom much is given, much is required. You have a lot, so give back – help those who are living in desperate places around the world.” Here are a few excerpts:

I left Harvard with no real awareness of the awful inequities in the world – the appalling disparities of health, and wealth, and opportunity that condemn millions of people to lives of despair.

Humanity’s greatest advances are not in its discoveries – but in how those discoveries are applied to reduce inequity.

It took me decades to find out.

Imagine, just for the sake of discussion, that you had a few hours a week and a few dollars a month to donate to a cause – and you wanted to spend that time and money where it would have the greatest impact in saving and improving lives. Where would you spend it?

For Melinda and for me, the challenge is the same: how can we do the most good for the greatest number with the resources we have.

During our discussions on this question, Melinda and I read an article about the millions of children who were dying every year in poor countries from diseases that we had long ago made harmless in this country. Measles, malaria, pneumonia, hepatitis B, yellow fever. One disease I had never even heard of, rotavirus, was killing half a million kids each year – none of them in the United States.

We were shocked. We had just assumed that if millions of children were dying and they could be saved, the world would make it a priority to discover and deliver the medicines to save them. But it did not. For under a dollar, there were interventions that could save lives that just weren’t being delivered.

If you believe that every life has equal value, it’s revolting to learn that some lives are seen as worth saving and others are not. We said to ourselves: “This can’t be true. But if it is true, it deserves to be the priority of our giving.”

So we began our work in the same way anyone here would begin it. We asked: “How could the world let these children die?”

The answer is simple, and harsh. The children died because their mothers and their fathers had no power in the market and no voice in the system.

I talk to skeptics who claim there is no hope. They say: “Inequity has been with us since the beginning, and will be with us till the end – because people just … don’t … care.”

I believe we have more caring than we know what to do with.

All of us here in this Yard, at one time or another, have seen human tragedies that broke our hearts, and yet we did nothing – not because we didn’t care, but because we didn’t know what to do. If we had known how to help, we would have acted.

The barrier to change is not too little caring; it is too much complexity.

To turn caring into action, we need to see a problem, see a solution, and see the impact. But complexity blocks all three steps.

It’s hard to look at suffering if the situation is so complex that we don’t know how to help. And so we look away.

Finding solutions is essential if we want to make the most of our caring. If we have clear and proven answers anytime an organization or individual asks “How can I help?,” then we can get action – and we can make sure that none of the caring in the world is wasted. But complexity makes it hard to mark a path of action for everyone who cares — and that makes it hard for their caring to matter.

Cutting through complexity to find a solution runs through four predictable stages:

I’m optimistic. Yes, inequity has been with us forever, but the new tools we have to cut through complexity have not been with us forever. They are new – they can help us make the most of our caring – and that’s why the future can be different from the past.

My mother, who was filled with pride the day I was admitted here – never stopped pressing me to do more for others. A few days before my wedding, she said: “From those to whom much is given, much is expected.”

When you consider what those of us here have been given – in talent, privilege, and opportunity – there is almost no limit to what the world has a right to expect from us.

I want to exhort each of the graduates here to take on an issue – a complex problem, a deep inequity, and become a specialist on it. If you make it the focus of your career, that would be phenomenal. But you don’t have to do that to make an impact. For a few hours every week, you can use the growing power of the Internet to get informed, find others with the same interests, see the barriers, and find ways to cut through them.

Don’t let complexity stop you. Be activists. Take on the big inequities. It will be one of the great experiences of your lives.

You graduates are coming of age in an amazing time. You have technology that members of my class never had. You have awareness of global inequity, which we did not have. And with that awareness, you likely also have an informed conscience that will torment you if you abandon these people whose lives you could change with very little effort.

I hope you will come back here 30 years from now and reflect on what you have done with your talent and your energy. I hope you will judge yourselves not on your professional accomplishments alone, but also on how well you have addressed the world’s deepest inequities … on how well you treated people a world away who have nothing in common with you but their humanity.