Confronting a warlock in Caracas 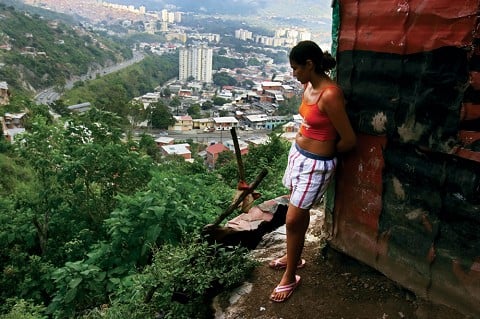 Arriving in  Caracas, Venezuela in 1993, our team immediately saw its cauldron of contradictions. Skyscrapers and slums coexist uneasily.  Its six million inhabitants seemed to be just one coup d’etat away from chaos.  Violence and murder were rampant in the slums. Less than one percent of the population were evangelical Christians.  Kiosks sold satanic literature and articles of witchcraft dotted the boulevards.

As our team walked through the city, it came upon an unusual sight.  A crowd of onlookers surrounded a man wearing a black, velvet mask.  While he stood at a distance, members of the crowd picked cards from a card deck.  Curious, one of our team members asked one of the people standing there what was going on.

“That man claims to have supernatural powers.  I think he is a warlock,” was the reply.

Sure enough, though blindfolded and too far away to see in any case, each time a card was picked, the hooded man correctly guessed what it was.

Suddenly, one of our team members held a Bible aloft.  Members of the crowd jeered at this unexpected challenge to the man behind the hood.  He paused momentarily, trying to divine what the article in question was.  “I can’t tell; it seems to be some kind of book written in English,” he said in Spanish.

Fortunately, a team member had a Spanish Bible and held it up in the air.  The warlock immediately responded with revulsion and rage.  Ripping off his mask, he quickly approached our group, yelling in Spanish at our team members, “Why are you here in our country?  We are not interested in your Christian Bible!  We are not interested in your Jesus!”

The crowd seemed invigorated by the potential for a fight.  Cries of, “Gringo!  Gringo!” resounded.

Ron Campbell, one of our team members, responded,  “What is your name?”  He asked.

“They call me Luis.  But what is that to you?  You are an offense to our people.  You should return to America.”

Ron, boldly persisted, “Luis, you can rant and rave at me, but I just have one thing that I want to say to you and that is, Jesus loves you.  You can resist him all you want, but he loves you, Luis.  You may try to fight him and curse him, but he loves you.”

This was too much for Luis to endure.  Sputtering threats, he began to walk away.

Ron felt the Holy Spirit prompting him and jumped atop a park bench to address the crowd that now looked on in amazement.  “People of Caracas, you have heard the words of death that this man brought you.  You have experienced the bitterness that the devil brings to your life.  In contrast, Jesus Christ came to bring us the words of life.  He came to earth and died that we who have sinned might live.  Many of you have heard of Jesus Christ.  You know all about him, but you have never made him Lord of your life.  How many of you are tired of living life to gratify your own desires?  The Bible says that Jesus said, ‘No man comes unto the Father but by me.’  How many of you would like to receive eternal life and make Jesus Lord of your life?”

At this point, between 20 and 25 people raised their hands.  Ron went on to explain the difference between the kingdom of darkness and the kingdom of light.  He led them in a prayer.  The local pastor who was with the team got their names and asked to follow up with them.
Our team left the scene, having experienced one of the more graphic power encounters of their lives. This stuff is real. Paul said it well, “My message and my preaching were not with wise and persuasive words, but with a demonstration of the Spirit’s power.” (1 Cor. 2:4).