Desperation on the streets of Bangalore 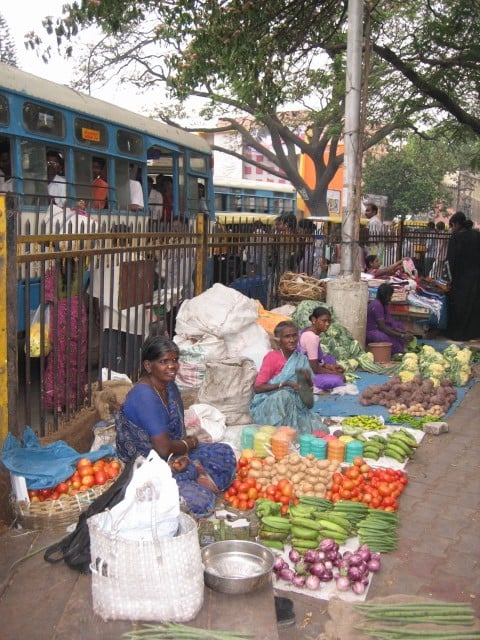 My heart is always breaking for these terrible situations we see. Twelve year-old orphans raising their younger siblings in Africa, people scavanging the dumps of Manila for scraps, and the sex workers of Asia.  Kelly Chadwick captures the pathos of this last group in the following blog:

But 5 p.m. in Bangalore, India looks a little different.

We covered ourselves in long pants and scarves and headed out to the streets. To Market Street where you can buy a lot more than just fruits and vegetables. To the train and bus stations where travel isn’t the main agenda.  To the alleys and corners where darkness isn’t only physical.

Most of these women were sold into this lifestyle by friends or family members desperate for money they couldn’t seem to earn.  Women probably isn’t the right word because many of them are little more than children themselves.  But they’ve been sold to pimps who prostitute them and take as much as 80 or 90% of their earnings.  They were sold without their consent.  They stay out of fear.

Fear of the men and women who now own them and have threatened their lives if they leave.

Fear of having nowhere to go and no way to support themselves if they leave the streets.

Fear of their families where they have now brought shame and condemnation.

Fear of facing the reality of pregnancies, HIV and other STDs.

So we watch them.  We watch them walk aimlessly in circles, boldly staring at every man they pass, using their eyes to ask, “Am I what you’re looking for?”  We watch parties (potential clients) approach them and begin negotiations.  We watch them climb in auto rickshaws to head to the nearest rest house.  And they repeat this process an average of 15 times each night. We stood on a bridge for 15 minutes watching one woman negotiate with probably 10 different men.  Her motions got more and more frantic as time passed without securing a client.  She could see the money slipping away with each man that leaves.  At first I was relieved that maybe she wouldn’t have to go through this tonight…but she knows it will be much worse if she doesn’t bring home enough cash and panic sets in.

By now we’ve lingered too long and have to keep moving.  ‘R’ is getting nervous because the criminals are coming out.  So we make a few more rounds and he points out a few more FSWs, even quickly introduces us to a couple.  He knows them.  They know him.  And he is there just in case tonight is the night one of them will ask him to take her home.  But no one asks.  So we head back to the car.  The car with doors that lock to protect us.  The car that drives us to the house behind the gate, with beds and fans inside.  The place where we feel safe.  The place where hundreds of women from the streets have come to find a safe place.  The place where hundreds more will come.  20 of them are sleeping below me even now.

Haunted only by their dreams and memories…and even those are fading.  Because they’ve found hope.

And that’s where I’m living this month.  Privileged to learn their stories and see the light return to their eyes.