Did God set this whole thing up to lose? 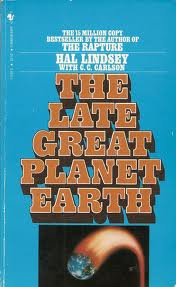 The Late Great Planet Earth was all the rage when I was a kid. It contained convincing proofs that we were living in the last days. Hal Lindsey’s book was a bestseller.
We all lived in a combination of anticipation and fear. In youth group we sang songs like “I wish we’d all been ready.” At any moment Jesus was going to return and all the mayhem in the world would be set right.
41 years later, Lindsey continues to sell bad news on his web site. And his fellow gloom and doomsters continue to throw up air balls at the hoop with their failed forecasts (most recently last Saturday). I think they appeal to the same base instinct that draws people to horror movies. Zombie movies are all about the world as we know it ending and monsters taking over. It’s the same theme, just homogenized and given a Christian label and a good ending.
Never mind that the world shows no signs of ending. Or that Russia and America
are now trading partners and democratic protests are underway around the
Mideast.
What do you do when the world just won’t end like it’s supposed to? How about this, why don’t we all take a fresh look at our eschatology? Here’s a question that Andrew Shearman likes to ask for starters: Did God set this whole thing up to lose?
I mean, really – here’s God – he’s all-powerful and can do anything. And he lets man muck it up so bad that he just has to blow the whistle and say, “Whoah, everybody stop! Game over! Things are getting so ugly out there that we just need to end things now.”
If we look at the tide of world events, things are not getting worse, they’re getting better. Communism has ended and economies the world over have grown. In general, we live in times of peace. And more people are embracing the Prince of Peace than ever before in history.
There’s more freedom of expression and the good news flowing to more places around the world than ever before. The church is exploding in Africa, Asia, and Latin America. Yet we choose a negative, defeatest theology that is continually proven wrong. Really?
If no man knows the day or the hour, why obsess on knowing? Why not join with Jesus in his prayer that his kingdom would come? Why not work with him to make it so? The life you have left on this earth is too precious not to.