Do I tell my floating dog story?

We’re in Charlottesville, VA at the 20th year reunion of our business school. It’s an occasion for reminiscing. Arriving at the reception last night made me think thoughts like, “How will I ever explain to these people what I do?” So I talk about changing lives or African orphans or prayer and,…
By Seth Barnes
21 April 2007, 12:04 am
By Seth Barnes
21 April 2007, 12:04 am

We’re in Charlottesville, VA at the 20th year reunion of our business school. It’s an occasion for reminiscing. Arriving at the reception last night made me think thoughts like, “How will I ever explain to these people what I do?”

So I talk about changing lives or African orphans or prayer and, sure enough, my worst fears are realized and sometimes the reactions are just blank stares. At which time too often I am tempted to riff on whatever comes to mind, like the following story from the early days of the ministry. And actually, I don’t think there’s any real purpose to it other than to fill the air with words and then to escape off to some other conversation. It’s just cocktail party chatter. Here’s my story:

In 1992 after Hurricane Andrew hit, some friends and I drove down to help clean up. It was an incredible disaster scene. Everywhere buildings were squashed, trees flattened.

Some friends of ours whose roof was ripped off thought that they would die. They described experiencing a fear so visceral that virtually everyone became incontinent. 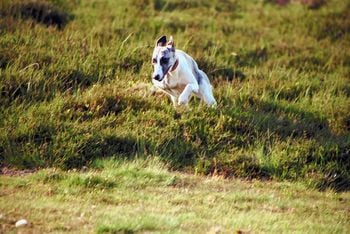 Patrick, an uncle of our friends, told us about getting ready for the hurricane’s arrival. With the storm approaching, he and the family went to the most secure room in the house, but left their dog in the laundry room chained to a pole.

The hurricane got closer and the winds howled at ever greater rates of speed. Trees up and down their street were being upended and power lines were ripped from poles.

At the height of the storm, the raging wind opened a hole in the ceiling. The suction was unstoppable: everything in the room began flying toward the hole. Hearing the racket, Patrick didn’t know what to do – should he stay in relative safety or go investigate? With noise and wind all around, he struggled to the laundry room.

Upon opening the door, he saw the most unusual sight: his dog, still chained to the pole, was just floating in mid-air, all four legs splayed out in apparent terror. Patrick made his way into the room, struggling to maintain his balance and yanked on the dog’s chain, pulling him down to earth.

The dog was grateful to be rescued.

You know, I never got the chance to share this particular story or any other story. Most people were too interested in sharing their own. And so, I found myself listening.

There was the consultant who actually was interested in listening prayer.

The friend whose boyfriend was murdered and the murderer being re-tried after already being convicted.

The bond trader who’d made a killing and lost it all.

The financial whiz struck down by MS now in a wheelchair.

The friend who’d made millions and was devoting himself to his wife’s career.

The portfolio manager who, having been successful, was wondering how to “give back.”

“You know,” I thought to myself coming home, “everyone has got a story. It’s more fun to listen to them than to tell my floating dog story.”