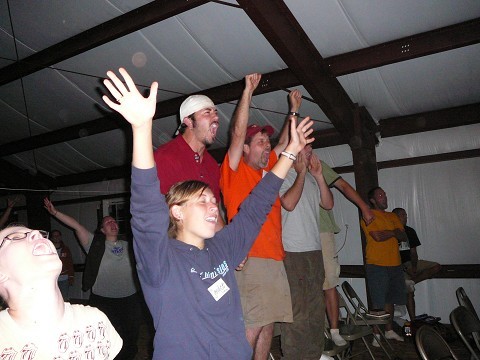 I’ve got this dream that I’ve had for a while, but I first wrote about in a September blog. It’s a dream of my children’s generation seizing the opportunity to wake up to the greatness within themselves.

In the last two days, I’ve watched that dream, like a jonquil in spring, unfolding. The decision to give a year to live and minister in a homeless way as Jesus did, healing the sick, binding up the brokenhearted, announcing the Kingdom, is a courageous one that few young people want to embrace. It seems crazy to leave family and friends and comfort zones behind. Joining the World Race, they get to do this.

But taking that step only makes you a candidate for a lot of pain early on in the process. I say that because, the cross came before Pentecost. The disciples had to die to a lot of dreams before they were able to embrace Jesus’ dream of the Kingdom. And over the last two days, our World Racers have been dying to a lot of stuff.

Last night they repented to one another for things they would have preferred to keep hidden. A revival of sorts broke out as they laid themselves bare, and postured themselves to receive grace. This morning, they admitted to one another the dreams that were no less tender and hard to verbalize than their repentance issues.

And there was a soaring sense of possibility as we affirmed those dreams. Dreams of coming alive, of counting to the broken and the abandoned. Several feel called to give themselves to a ministry to prostitutes. Several feel called to orphans. One feels called back to North Carolina to bring alive those who are still numb there.

And with the dreams, came tears of joy and a release of the Spirit. What makes this different than just another conference is that, now they get to go do it. And this afternoon, I saw my own daughter doing it, ministering to a broken old lady on the street. This is not hit and run – they are charged to keep caring for those to whom they minister, and to place them in the hands of local Jesus-followers when they leave.

It’s the stuff of dreams.