How do I ever trust again?

I'm in Guatemala with our amazing L squad. Yesterday I sensed that God wanted to do something with the squad. At breakfast, I sat at a table with six women. I asked if we could share the stories of our family of origin. It got deep and it got messy quickly. One by one they shared their sto…
By Seth Barnes
11 September 2012, 12:09 am
By Seth Barnes
11 September 2012, 12:09 am 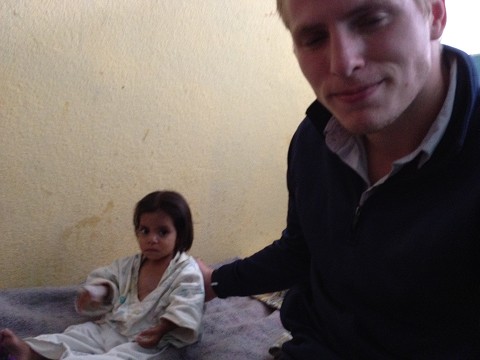 I'm in Guatemala with our amazing L squad. Yesterday I sensed that God wanted to do something with the squad. At breakfast, I sat at a table with six women. I asked if we could share the stories of our family of origin.

It got deep and it got messy quickly. One by one they shared their stories. Of the six, only one of them had not been deeply betrayed by her father.

As a squad we later went into a time of worship. I read Amie Gallegos's blog post (that I posted yesterday) to them. I sensed that God would use it to unpack some things in them.

Afterward, they began to share. They shared from the gut. I was amazed at how honest they were. My generation would never share that deeply.

Tears began to flow. Apologies were offered for how we as men had treated them as women.

It could have gone on all day. But people were waiting for us and we had to break it off. As we prayed, I got a picture of an egg that God was cracking. It had a hairline fracture in it, but he wanted to crack it all the way open and make an omlette of it. As tender as the moment was, I felt like if we could continue with worship in the evening, he would take us back to that place.

The day was great. We went to seven different ministry sites, including the hospital across the street. Anton and Cathy and I visited children like little Maria whose mom had died eight months previous and who suffers from malnutrition.

She'd been abandoned, left in a place of comfortless pain. Just like many of us in the squad. We were a squad of Marias suffering from emotional starvation. But hungry for healing.

Then last night, after worship, the Lord took us immediately back to where we'd been that morning. I couldn't believe how honest we were being with one another. The theme of the night was betrayal, depression, suicidal thoughts and attempts, and God's redemptive hand. In two cases they had attempted suicide, one with four bottles of pills and two with knives that bent and wouldn't go in when they tried to stab themselves.

Stories of sex, abuse and betrayal were the norm. And then the guys began to ask the women to forgive them. They shared how they had begun to repeat the cycle. The things that had been done to them they were beginning to do to others. "I'm so so sorry," one guy said, "will all of you women forgive me?"

It happened over and over again. I was weeping. Most of us were.

And the women spoke to the men and said, "I forgive you." They said it in ways that were personal and heartfelt. You could feel the grace beginning to flow out.

It was as intense a night as I've ever seen on the race. The courage of these young people to trust after what they'd been through blew me away. Where did they find this courage to trust these relative strangers around them? How could they go to these dark places so quickly with one another?

I told them, "I said at the beginning of this race that I don't fall in love easily and it's going to take me a while to love you. But tonight, I think that I already do." I've never been more proud of a group of people.

We still have so much to do. God has a lot of people queued up for heart surgery. And the question, "how do I ever trust again?" still hangs heavy in the air.

But for many – for the first time in years – there is hope. There is hope that, in fact, healing can happen.

So many of you are right where these guys are. You're asking, "how can I ever trust again?" I don't know what the answer is for you. But last night I saw that it's possible. God weeps with us in our dark season of betrayal. He's good and wants to lead us back to a place of hope.