How girls get trafficked in Moldova 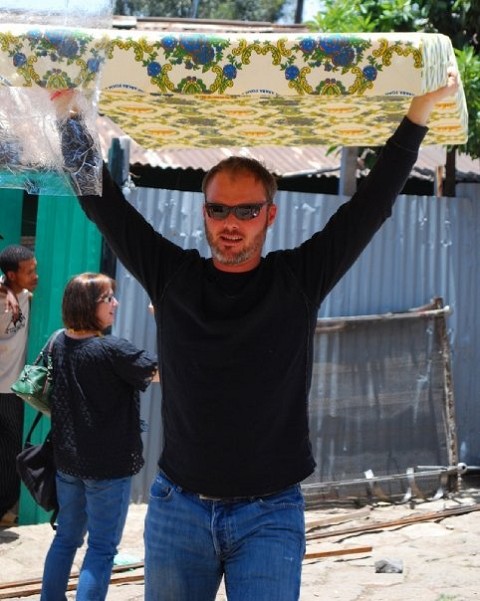 Today, we meet a psychologist to girls who have been rescued from
the sex-trade.

As we walk down the street, she tells us she has a
“surprise” waiting at our destination. I’m up for surprises. In fact, I
kind of flow with them. The day is clear, a slight breeze is blowing,
and for the first time I don’t even need my Northface jacket. We sit
down in an outdoor cafe with green umbrellas and Ahmad tea signs all
around. Reminds me of Kiev and the sun feels good.

“Do you want
to know why I brought you here?” Nothing to fear, no need to worry. Of
course we do. The black stuff in my cup isn’t real good so it’s not the
best espresso in the city. “Why are we here?”

“One of the girls
you will meet was trafficked from this restaurant.”

What…did…you…say?
At that moment, my world changed. The crowded city street was a
different place. A man from the Middle East appeared over Anne Jackson’s right shoulder.
Something about him, it wasn’t right.

“In fact, they’re here
right now. And so are the girls who are being trafficked. They lure
girls here for a job. Then they are sent to Turkey, Israel, and Russia.”

I
saw them. Teenagers draped with blond and brunette curls. You’ve got to
be kidding me. And I’ve brought Anne here? I mean Simon and Brad are
one thing, but a girl? Someone I’m responsible for, and I’ve brought her
into the midst of a den filled with sex-traffickers? I looked to the
right and saw two more men emerge out of the restaurant. They weren’t
Moldovan. Simon’s camera didn’t help things. He was shooting pictures
and video faster than Usain Bolt runs the hundred yard dash.

Now
we’re the center of attention. We tried to play it cool, acting like we
belonged there and were just shooting a plain ‘ol video about life in
the big city. My chest got a little bigger, my sixth sense a little
stronger. If there was ever a time I longed to be a CIA agent.

An
overweight, middle aged man sits down with a young girl at a table ten
feet from us. She might be seventeen. We captured the photo. She bats
her eyes and tries to impress her. He hands her a wad of cash for last
nights exploits. I’m
sickened beyond explanation. And then I realize, this happens every
single day. What am I suppose to do? Turn a blind eye? Pretend this evil
doesn’t exist? Go back to my comfortable life and wish that young girls
aren’t trafficked like this right in front of my eyes?

Something
inside tells me I can’t. I’ve been exposed and I’ll never be the same.

At
least ten traffickers sniff us out. They’re behind us, in front, to the
right and left. We’re absolutely surrounded. But were not in prison
like the young girls who fill the chairs. We have a choice. Their choice
had already been made for them.

This place has the heavy-weight
title of the highest rate of trafficked women in the world. Tens of
thousands simply disappear. Our psychologist friend pulls out a local
newspaper. “This is how they trap them. Local ads promising well paying
jobs abroad. Everyone wants to leave so all young girls are potential
victims.”

I look to the left and to my utter shock, see two girls
reading the same kind of newspaper. Once your eyes are opened, it’s
everywhere in this place. “I
brought you here so you can see the realities in our country. It
doesn’t do you any good if I only show you what most people want to see.
This is the reality.”

Tomorrow, we will be with five of the
girls who have been rescued from this nightmare. I want to be a real
presence in their live and fight back the evil that had control over
their life. Thank God there are people here who go to the front lines
every day. I have to do something, I can’t sit on the sidelines and hope
this goes away.

We’re in Moldova. Who would like to join us?  We
stood up from our table and walked out of that hell hole. The beautiful
blonde girl didn’t have that choice.
To follow Tom on his trip, go here.