How I became a Christian

I had grown up in a nominally Christian home, but I knew very little about Jesus.  It took the trauma of my father going off to war in 1967 for me to start my spiritual journey. 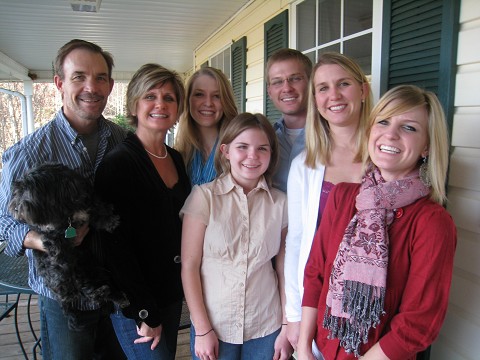 Left to raise a family on her own, my mom went searching for answers.  She found a friend, Shirley Wratten, whose husband had been sent to Viet Nam and had been the first doctor to die there.  Shirley told my mom, “If I didn’t have Jesus in my life, I couldn’t have made it.”
My mom decided to move from life as a passive, sitting-on-the-sidelines Christian to a place of reckless abandon to following Jesus.

The transformation in her was immediate and dramatic. She began to volunteer for a nonprofit organization.  She began to lead Bible studies in the ghettos of Washington DC. She passed out tracts everywhere. She seemed to always be praying. In short, I had a different mom – she was now a bona fide fanatic who has never looked back. When God later healed her of cancer, it only served to increase her intensity.

I remember my mother read me the story of Jesus’ painful death, a death he died so that I might have eternal life. I was cut to the quick. One night I prayed a child’s prayer of repentance. And, not at all sure that my prayer “took,” I continued to pray that prayer on multiple occasions after that.

Later, having made it through the war alive, my dad returned home. The military presented him with the award for being the best doctor in the Viet Nam war that year – an award named for, of all people, Major Gary Wratten, Shirley’s husband. I’ve always been proud of my dad for donating the award money to establish a foundation to educate the five Wratten children.

And so, I grew up in a Christian home.  When I was 17, my mother encouraged me to go on a two-month mission trip to Guatemala. That took a lot of effort on her part, because I was shy and was afraid. She propped me up in front of her friends and had me ask for prayer support. I thought to myself, “Why in the world would anyone ever want to support me?”

The trip to Guatemala was eye-opening in many ways. I saw poverty that I never knew existed. I fell in love with missions.

As I went off to college, I knew that my future lay in overseas work. I was convicted by God’s heart for the poor and oppressed in Isaiah 58 and I determined to commit my life to helping others understand that they can make a difference in the world. During my senior year, a great human tragedy was unfolding. The Khmer Rouge was killing nearly two million of their countrymen. The Cambodian people were fleeing to the Thai border by the hundreds of thousands. As they spilled across the border on the brink of starvation, they were placed in large refugee camps.

So, I went to work in a refugee camp. I chose to do this in spite of the fact that I’d recently fallen in love with my wife-to-be and was earnestly courting her. As shocking as the situation in Thailand was, it inspired me to go deeper in pursuing a life of ministry.

It was only after completing business school and continuing on in ministry that I discovered what had been missing from my walk with the Lord all my life. It was intimacy. While I’d always heard about having a personal relationship with Christ, I never understood that it’s possible to hear His voice.
Starting AIM in 1989 was not done out of a burst of vision or anything great in the Spirit.  Rather, it came at a time of brokenness when I had lost my way and realized that that God still had a call on my life to reach young people with a vision for missions.  Things shifted for me in 1991 I was at a retreat where Peter Lord spoke. Not only did I hear God speak to me in a very personal way, but I discovered for the first time what it means to make my relationship with God truly personal. It radicalized me.

Since then, I began to earnestly seek the Lord. Prayer became much more important to me. Evangelism became a passion. And now I’m discovering experientially what it means to disciple others as I’ve discipled my own children.

I’m a work in process. I’ve found that the main thing one needs in a relationship with God is an insatiable hunger to know Him and be in His presence.

As for the rest of my life, Karen and I are going through a transition as four of our five children have left the nest, leaving us with Leah, our youngest, plus two dogs and two cats. One of our great consolations is that we get to do life with a wonderful group of friends scattered around the world who are committed to building the kingdom. We know that, though the world’s needs are great, with a generation rising up to meet them, our greatest adventures lie ahead!