How Should Christians Respond to Terrorists in Places Like Istanbul?

Terrorists are showing up with new ways to fill us with fear every day. Bombs and beheadings and planes and trucks. We can’t help feeling sick when we see the latest headlines. How should we respond? Our team had the chance to find out recently in Istanbul. When the bombs went off, would our t…
By Seth Barnes
16 July 2016, 12:07 am
By Seth Barnes
16 July 2016, 12:07 am 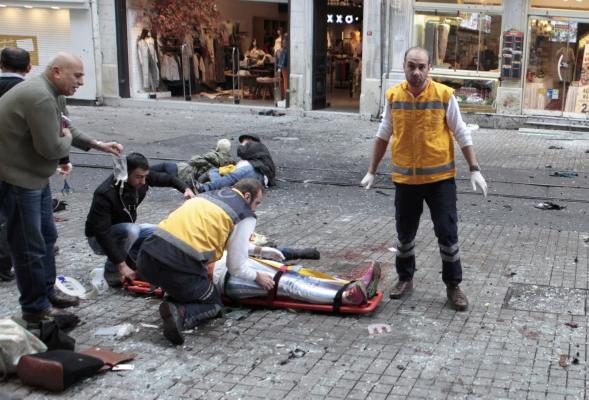 Terrorists are showing up with new ways to fill us with fear every day. Bombs and beheadings and planes and trucks. We can’t help feeling sick when we see the latest headlines. How should we respond?

Our team had the chance to find out recently in Istanbul. When the bombs went off, would our team stay, or would they join the crowds of tourists running for the exits?

Two terrorist attacks in the same city in the span of three weeks. Over 50 people dead between the two. Any level-headed person with the option to leave would. And anyone who was there to see it happen knows firsthand the dark effect of a terrorist attack and that its reach goes well beyond the blast radius.

My entire squad was in Istanbul when the first bomb went off, just a kilometer from where we were staying. I didn’t hear a blast. I didn’t see smoke rising over the domes and minarets that punctuate the cityscape like commas in a run-on sentence.

I didn’t hear the wailing of the men and women who suddenly found their families minus one that morning. To the contrary, an eerie silence blanketed the city, as if the entire place had gone comatose or breathed its last. In a way, many of the locals thought it might as well have.

You see, every tourist in the hostels and hotels in the Sultahnamet district fled the city that morning. Barely a soul could be seen wandering streets that just a day before had been so crowded and bustling that trying to get anywhere in a hurry might have led to an aneurism.

The whole city was a ghost town. The bombing didn’t just kill 11 policemen that day. It killed people’s spirits. And the fear that it conjured began killing the city itself – its business, its charm, and its people’s livelihoods.

But we stayed. In the immortal words of The Blues Brothers, “They can’t stop us. We’re on a mission from God.” We frequented local restaurants and shops. We made friends with the waiters and the restaurant owners and businessmen.

Through our presence, our willingness to remain joyful, our resistance to fear, and yes, the money we spent, God put smiles back on their faces and groceries on their family’s tables.

My God is bigger than terrorism, and so is His love for His people. There’s danger out there and fearsome enemies and mighty challenges, but that’s where Jesus is walking and I want to be by His side. And if my Turkish friend is willing to risk life and limb to know God, then I can certainly risk the danger to love him and point him toward Christ.

Was Joshua and his team afraid? Yes. They had been taught to follow Jesus growing up in America, but were still figuring out what that meant as young adults abroad in a dangerous world.

Jesus’ gospel required little of them in the safe confines of their homes and churches. But with their backpacks strapped on and their passports in their hands, his gospel was put to the test.

Jesus articulated his gospel with his actions first and then his words. Did Jesus face danger? Yes. Right off the bat a crowd was offended by his teaching and tried to kill him by throwing him off a cliff (Luke 4). What did he do? He didn’t run – rather he engaged and “passed through their midst.”

When he had the opportunity to explain this later, he said that we should basically do the same: “bless those who curse you, pray for those who mistreat you.” (Luke 6)

Yes, this is counter-cultural. In a culture where comfort and safety is so prized, it doesn’t make sense. We are taught to build higher fences and pay for ever-more-elaborate insurance policies. Our politicians try to out-promise one another. “My fence will be longer and higher than yours!” They say.

The message is that we are to seek safety by running and hiding, not engaging. We are to read the headlines, raise the draw-bridges and retreat further into self-sufficiency.

But we serve a God who is out to fight fear with an aggressive, engaging love. Jesus showed us with his life how to courageously fight fear. His mother had to watch him walk into danger and release him to God just as we family members have to release our daughters and sons to do the same.

Today, his disciples continue to show us that fear or even terror may grab the headlines, but it can’t defeat love as a force for change. It has been losing this battle for two thousand years, and as a strategy of the enemy, it will go down in flames.

As followers of Jesus, we must follow him forward into places like Istanbul, trusting that he will protect us.