How to Survive When You’re Wrecked

I've started blogging more regularly along with a community of fellow ragamuffins over on Wrecked. Please join us over there. Here's my latest: My daughter Emily was in a wreck this past month. One moment life was happening as she planned, and the next moment, with a sick cr…
By Seth Barnes
03 April 2013, 12:04 am
By Seth Barnes
03 April 2013, 12:04 am 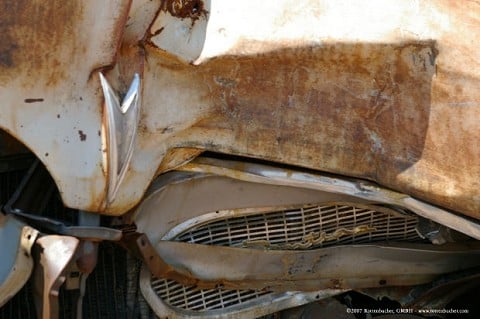 I've started blogging more regularly along with a community of fellow ragamuffins over on Wrecked. Please join us over there. Here's my latest:

My daughter Emily was in a wreck this past month. One moment life was happening as she planned, and the next moment, with a sick crunch of metal on metal, her car crumpled against another vehicle.

Thankfully, everyone was OK. But when she got out of the car and began to take stock, questions filled her mind: How bad was the damage? Whose insurance would cover it? What if the person in the other car was unreasonable?

A new reality began to demand her attention. She experienced a series of reactions that are commonly experienced by those who are in wrecks. When we are wrecked, our understanding of the world and how we fit in it changes – we begin to think differently. Emily's accident illustrates what that change can look like.

1. Plans all changed. The wreck and its consequences demanded her full attention. The natural order of life had been upset. When we're wrecked, we have to set aside some of our plans and preconceptions. God is often right there in the wreckage, using pain as a tool to communicate with us if we'll stop what we're doing and listen.

2. Thankfulness. She was OK. In God's providence, she had made it through a tough spot. Survival is better than the alternative. And gratitude is always a good response. If you've been wrecked and are still intact on the other side, why not take an inventory of the things that you can be thankful for? Life will go on.

3. What could have been. People die in wrecks. A small mistake can result in serious consequences. Emily was alive, but it could have been much worse. Sometimes people ask the question, "What if…?" for years after they've experienced a wreck. Reflection is good, but at some point we need to move on and accept the new reality.

4. Emotion. Not just her body, but her spirit had been jolted. When spirits get slammed around, you expect an emotional response. Tears are normal. Grief of different kinds is necessary. If you've been wrecked, have you grieved what you've lost? Maybe all you've lost is time. Give it its due and move on.

5. Shame. Afterward Emily had the sort of thoughts we all do after a wreck: "I'm so stupid," and "I should have been more careful." In cases where people survived deadly accidents, it's typical to wonder, "Why me? Why was I spared and not the other person?" We may never get the answers we seek, but the emotions we feel are valid and shouldn't be supressed.

6. The community of survivors. I gathered a group of friends and we prayed for her. We prayed prayers of perspective and absolution. Emily could lift her head above the wreckage and hear the words, "It's going to be OK. Life will go on." The truth is, we've all been wrecked. We all suffer pain and cope in its aftermath. God specializes in reclamation projects – he takes our wreckage and makes us whole.

Getting wrecked is no fun. But at some time or another we all wind up in bad places and have to deal with the consequences of a changed world.

Emily's wreck was brief and the consequences short-lived. Maybe your wreckage feels like mine. I've suffered broken bones and broken relationships, my skin and my soul have been badly burned. I've suffered dislocation and readjustment of body and spirit. And along life's road, death has come visiting.

Adam was banished from the garden, and people have been getting banished from comfortable places ever since. I’ve been lost and in some ways, am still finding my way back. If I’ve learned anything along my journey it’s that we all get wrecked – it’s normal for humans. Most of us are coping with some hidden pain right this very moment.

And here’s the deal: It’s best to just go ahead and admit it. You’re not as messed up as you may think you are. Whatever struggles you may have – own them. Share them if you can. Give them back to God. There’s a better life ahead.