I’ve never met Andrew Bennett, but I liked his approach to life on the World Race, so I followed his blog and have continued to do so after he came home.   Almost all racers struggle with re-entry. There are the same relationships they left a year ago. There are the situations where the…
By Seth Barnes
07 September 2011, 12:09 am
By Seth Barnes
07 September 2011, 12:09 am 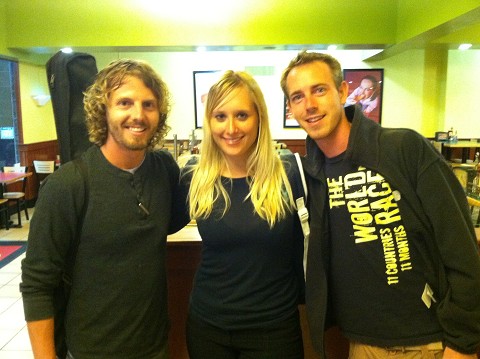 I’ve never met Andrew Bennett, but I liked his approach to life on the World Race, so I followed his blog and have continued to do so after he came home.
Almost all racers struggle with re-entry. There are the same relationships they left a year ago. There are the situations where they struggled in the past. Nothing much has changed except them. They’ve seen blind eyes open; they’ve seen the lame walk; they’ve preached the gospel around the world and cast out demons in Jesus’ name. How do you top that?
As with all racers, the question of, “What do you do for an encore after you’ve seen the world?” loomed large for Andrew. His answer? Nothing stops. You just keep doing what you learned to do on the race. He shares what that looked like:

JD and I decided to go to a local hospital in Oakland about a week ago.  I saw a woman limping and using a cane.  She said she had stiffness in both her legs and was in pain.  I asked if I could pray for her and she willingly said yes.  So bending down and putting my hand on her foot I started to command the stiffness to leave her body and proclaim life and healing in Jesus name.  She checked out her legs and immediately looked amazed that it was gone and she felt better.
By this point she was quite excited and started to open up about her life to us.  She told us that she used to be a Christian 10 years ago and had two good friends that she used to go to church with, but had lost touch with one and the other had since passed away.  We then parted ways and we laughed as she walked away forgetting her cane.
An hour later I came across the same lady who had been healed of stiffness in her leg.  She was quite ecstatic so I attempted to calm her down and figure out why.  She said that right after talking with me she ran into her friend, the Christian friend of hers that she hadn’t seen in 10 years and was able to reunite with her.  God’s timing is impeccable!
In Berkeley we noticed a girl to the side of us being held up by two guys on both sides of her.  She was limping and not really putting any pressure on one of her feet.  JD walked up to her and asked her what happened.  She said that she had just twisted it and thought it was sprained or broken.  He then offered his “medical assistance” and leaned down to place his hands on her foot.
After praying he asked her how she felt and I seriously wish you all could have seen the look on her face as she was able to stand on her hurting foot again.  She walked away on both of her feet feeling quite stunned at what had just happened.

Andrew’s conclusion: “Preaching the gospel, praying for the sick, and walking in the supernatural is NOT for an elite group of Christians, but for ALL believers!  Jesus said, ‘the Kingdom of God is at Hand.’  It is supposed to be something tangible that we can touch and interact with.  The Kingdom is within us…we just need to learn how to release it by trying!”

When Jesus gave all authority to his disciples and to us, he didn’t put an asterisk on it. We just need to step out in faith and watch him do the rest.