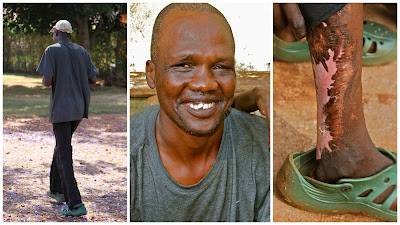 I knew he was in bad shape as I caught that first glimpse of his leg’s skin burnt charcoal black, bone exposed, nothing even still alive enough to bleed.

I knew this man. At least, I thought I did. As the village drunk of Masese, he was a constant annoyance to me. I was appalled –  but not surprised – to learn that while he was passed out in the middle of the day, some neighbors lit his house on fire. The fire caught his leg and he crawled out just in time to watch his neighbors steal all his remaining belongings from inside.

And thus began the season that I thought would heal him, but instead healed me.
He moaned as I injected painkiller and mumbled a story that I couldn’t understand. I prayed over his wound and over his heart, and when he fell asleep on the porch, I didn’t make him move, but draped a blanket over him instead and I didn’t realize that just this simple action would be the beginning of coming to love the newest member of our family.
The doctor at the best hospital around told me he would lose his leg if I didn’t dress and clean it daily. That probably he would lose it anyway. At this point, I don’t think he cared one way or another, but I did. Just months earlier, tragedy had struck our family. And although I had no idea at the time, Jesus was bringing about my own healing by drawing me into someone else’s. I couldn’t verbalize it then, but it is as if my heart screamed, “I lost my daughter. I lost my reality. You will not lose your leg. You will not lose yours.” And so I threw myself into becoming an expert on third degree burn care.
For hours each day I scraped the dead skin from this wound and God scraped at the dead places of my heart. Buried places that, though I would never say it, somehow doubted that God could be good, all the time, when my daughter’s bed lay empty. And I said it out loud, to him and to myself. God uses all for good. For His glory. God is using this, I said, and I smiled at new pink life showing through and though I didn’t recognize it yet, God was growing new life out of the very hardest places of my heart.
For a month he came and went. I would bandage the leg and send him home; he would return the next day and I would almost be thankful that he was drunk because even still the pain was excruciating. I would wash and scrape and scrub and dress and I cry and I would say to that wound and to anyone who would listen, “We will not lose this leg.” Others from the community stepped over our new friend asleep on the porch and they shook their heads. “You can’t save ’em all. Not this one, Katie.”� But I am stubborn. And God is relentless.
Eventually he just moved in to the little house in our back yard. This made finding him at bandaging time quite a bit easier and it allowed me to make sure he wasn’t drinking. As he began to sober up, we began to have longer conversations; he would tell me all about his life and his family before he became an alcoholic and found himself homeless in Masese and I would tell him about a Savior born as an infant in a feeding trough and nailed to a tree.
He questioned everything I said about God’s goodness and sovereignty, and I know that as I was answering him, I was answering myself, too. In the darkest place of my life God had me testify each day exactly who I knew Him to be. In those hours of wound bandaging He was introducing Himself to me again. The Working All For Good God. The Still and Always Faithful God. The God who sees who we are and uses all the broken places to make us who we are becoming. I said these things out loud and I watched God make them true all over again.
And this is what I learned: the hard does not minimize His goodness but allows us to experience His goodness in a whole new way.
252 days of wrapping and talking and laughing and crying later, new skin covered this once dead area. The leg that so many thought was lost could walk and even run. And the man that so many thought was hopeless had been sober for over 6 months. A week later, this physically healed man walked into my kitchen as grinned from ear to ear. “I believe it,”� he announced, “today I believe that Jesus is the Son of God.”� Simple as that.
I didn’t try to contain my excitement as I danced around the kitchen that day, and I still daily choke back tears as the time I once spent wrapping his leg in gauze is now spent scouring the Bible together for the answer to his every question.

The burnt area on his leg is still a few shades lighter than the skin surrounding it. “Can I look at your leg?” I ask often, and he knows why. “See what God did?” he will chuckle. And we both see so much more than new skin.