Learning to live a generous life

How many times have you been on a mission trip and the people you’re visiting invite you into their home and give you a wonderful meal that they can’t afford? That kind of generous living never fails to humble me – it’s counter-intuitive. Most poor people tend to hoard what little they have…
By Seth Barnes
11 November 2011, 12:11 am
By Seth Barnes
11 November 2011, 12:11 am 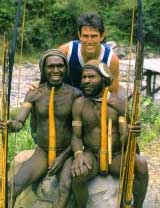 How many times have you been on a mission trip and the people
you’re visiting invite you into their home and give you a wonderful meal
that they can’t afford? That kind of generous living never fails to humble me – it’s counter-intuitive. Most poor people tend to hoard what little they have. Giving your time and money away is unnatural behavior.
Jesus wanted his disciples to see this and to understand how to live a generous life. His disciples were like we are – thinking of themselves first.
He saw the example he needed – a poor old widow. What a contrast with the rich people! Pointing her out, Jesus made an observation that may be true of some of us: “They all gave out of their wealth; but she, out of her poverty, put in everything – all she had to live on.” (Mark 12:41-44)
My friend John Cutts works in West Papua with Indian tribes so remote, it takes three days to find them. He wrote me, describing their generosity in the midst of their poverty.

I just arrived in the village of Puluk today, far off the beaten path and home to the Wano tribes people.  The only way in presently is either a two or three day trek or by chopper.
Although they are hungry due to months of rain which impacts their sweet potato gardens, they somehow find the energy to work a bit. I was touched to be given 5 very small cooked sweet potatoes by the pastor when food is so scarce.  I ate 2 of the smallest ones as a gesture to show how grateful I was and then returned the others to him.  After arguing that they were for me, he finally ate the remaining three.
I realized he had given all his food to me, knowing that if I ate them all, he would be hungry.  What humbling generosity I find even in these tough times.  His generosity is a way of life, I discover.
He recounts how 8 out of his 11 children have died while he has worked as a pastor, often in remote villages like Puluk, where no medical help is available.  I am struck with how insignificant my “trials” are compared to those faced by these bigger-than-life examples of sacrifice and dedication.

Frankly, folks, I have a hard time relating to someone so saintly. I have five children. I can’t imagine losing four of them and continuing to serve God. I’d want to just give up on life; it would just be too much. The Puluk Pastor’s example is like that of the poor old widow – overwhelming generous. He’s learned a secret that Jesus wants to share with you and me.
Have you ever been overwhelmed by a poor person’s generosity? How did you feel? How did you respond?