Road rage and me getting over my bad self 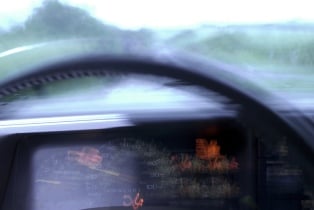 For example, today I’m driving to the airport to fly to Colorado.  Consider the kind of road rage that you sometimes see out on I-85, heading towards Atlanta. I was reading Joe Bunting’s blog on the subject and remembered the time I was just as stupid as anyone driving around out there.

It was 1986 and I was going from D.C. to Charlottesville.  I pulled out to pass this line of cars at a normal passing rate of speed and this other guy raced up behind me and sat tailgating on my bumper, flashing his lights and making a nuisance of himself.  There was nothing to be done but finish passing up the cars and pull into the right lane.  At which point Mr. Maniac Driver zoomed passed me, flipping me off as he did so.

He must have been doing 90 mph in a 55 zone and quickly disappeared over the horizon.  The whole incident left me peeved and thinking dark thoughts of revenge.

Imagine my delight when several miles later I spotted a cop car up ahead with his lights going. Who did he have pulled over but Mr. MD.  “Ha!” I said to myself, “You got what was coming to you!”

And as I pulled alongside them, I slowed and yelled out encouragement to the cop, “Way to go! That guy is a crazy driver – throw the book at him!”

I continued to drive along, smugly thinking to myself how justice had been done.  Then, suddenly it occurred to me.  What if Mr. MD had a gun?  What would he do after the cop was finished writing him a ticket?  His first thought would be to track down the turkey that yelled to the cop.  I would be toast.

Panicky thoughts began entering my mind and my foot began weighing heavier on the accelerator.  Pretty soon I was zooming along at 75 mph and looking worriedly in my rear view mirror.  The minutes dragged by. Sweat was on my brow – what an ignominious way to die!

I was never so glad to enter the Charlottesville city limits…
As I drive down I-85 this morning, I’d like to say I’ve learned my lesson, but it’s amazing how little it takes to set me off.  Cut in front of me, and I might just go Mad Max on you.  I guess it’s as good an apologetic as I’ve got for man’s original sin nature.