Scared to death at gunpoint in Tanzania 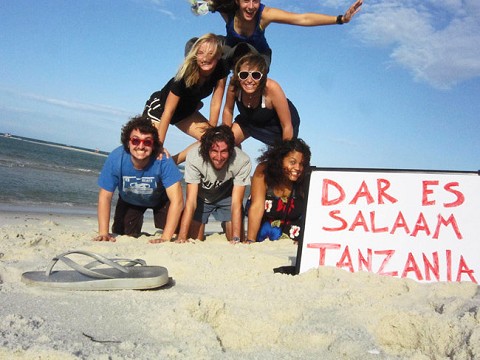 “Please God, protect us. I can’t die
like this…I still have so much to do with my life.”

There
is something different about a prayer when you think it may be your
last. When you are praying for your life, I believe it’s then that God
literally puts you in the palm of His hand.

I hate when people
say “The day began just like any other day…” but this one did…Kinda.
We had woken up at 9 am and ate breakfast as a team. I had a weird pain
in my legs and was feeling very nauseous. Before going out to do door
to door evangelism, my team and ministry contact David prayed for
healing for me. They went out and I stayed back reading “The reason for
God” by Timothy Keller. When they came back a few hours later, they had
amazing stories of what had happened that day. They had prayed for a
women that was paralyzed and SHE WAS HEALED! She also accepted Christ
into her life. I spoke to David about the day and we discussed what
doing the work of the Kingdom looks like. He said that “we have been
doing so much for Gods Kingdom that the enemy may try to discourage us”.

A few hours later we had church. Tyler and Jillian gave the
message that night. There were about 10 people there that night, granted
it was a Wednesday night service. Jillians message really stuck with
me. She spoke about how Jim Elliot was willing to die for Christ, and
she wondered if she was as well. She then probed us a step further and
said that if we ARE willing to die for Christ, are we willing to LIVE
for him as well. The whole church then prayed for my healing and God
kept saying to me “sow and reap, sow and reap”. The pastor then told us
about someone nearby that was sick. He asked two of us to go and pray
for them. Tyler and I volunteered, as the rest of the team headed back
to the house.

We arrived at the house, and found out that the
person sick was a little boy. He had cancer. They couldn’t afford
treatment for him so he just lived with the pain. The pain was severe in
his leg and stomach. As I leaned over and prayed for him and said “God,
this is where we NEED you to heal this boy. You send us out to heal the
sick. This boy has no means of being healed but by your grace.” At that
point, all the pain in my legs and stomach went away. It was as though I
was having the pain, for this little boy. I continued to pray for him,
and I believe that God will heal him.

We then returned to the
house and Jessica, Jillian, and Trevor were working out. We all laughed
together as they did the intense moves of P90X. After the workout, our
contacts David and Martin called us to the kitchen for dinner. As I
walked over to the table I heard a huge bang. It sounded like a tree
falling onto the door. Then I heard the pound again, and it was coming
from the back door of our kitchen. My instincts told me that this was
not normal. I screamed ” someone is breaking in!” and I ran towards my
bedroom.

A moment later and the intruders had broken through the
back door using cement blocks. They marched forward with a gunman in
the front, and men with clubs in their hands. My team scattered
frantically trying to find somewhere to go. (From this point forward, I
can only tell you my account of the story because we were all
separated).

I had run into my bedroom, turned off the light, and
closed the door. Jenae knocked on the door and said “Jessi, let me in,
its Jenae.” I opened the door and the key fell out of the lock. Jenae
came in and I slammed the door shut behind her. I was unable to lock the
door, so I braced it with my body. Jenae ran around the room trying to
find somewhere for us to hide. We were unable to fit under the bed, and
the closet had no coverage because there were no doors. I told Jenae to
just help me hold the door. She sat beside me and braced her leg in the
door frame of the storage closet.

I began praying harder then I
have ever prayed in my life. I asked God for forgiveness for my sins,
and to protect us. I said to God “God, I can’t die like this…I can’t
die like this…I know you have so much you still want me to do..please
help us.” I then heard them break down Trevors door. My heart started
beating so hard I could feel it in my mouth. Jenae and I grabbed each
others hand and held our fingers interlocked until our knuckles turned
white. I could hear the men screaming, and I couldn’t hear anyone from
my team. I believed this was the end of my life. After watching movies
based in Africa such as Blood Diamond and Hotel Rwanda…I believed
these intruders would be merciless. I then started praying again, even
harder…”God, protect us. We need you right now God. I command them to
flee in the name of Jesus. They have no place here.”

The men then
surrounded our room and started looking into the windows. Jenae and I
stood motionless. I don’t even think I breathed in that moment. I
thought, if they think the room is empty maybe they wont come in. Like
Jenae describes, “It was like the worst version of hide and go seek.”

Then
they began banging on our door. They were screaming and pushing on our
door so hard. They opened the door a little bit and we pushed back. My
feet were sweaty and sliding across the tiled floor as I used my legs to
push my back against the bottom of the door. They kept pushing. Jenae
asked me if we should just let them in, in fear that they would begin
shooting through the door. I said NO! In my mind, we were as good as
dead if that door opened. Eventually they stopped trying to get in. I
then began shaking. My whole body felt as if it were going into shock, I
couldn’t stop shaking. I then began to worry about Jessica and Jillian.
I feared that the men were doing horrible things to them, and that we
needed to be together. I stood up, and wanted to help them. I felt
completely helpless. Jenae said “Jessi, we can’t go out there! Just hold
the door”!

A few minutes later, but what felt like an hour…I
heard Trevor at the door. He said “Girls, are you ok”? Never before did
it sound so amazing to hear a familiar voice. We stood up and opened the
door. Relieved and still scared at what I might see in the living room,
I started to cry hysterically. We then saw Jessica and Jillian, and I
hugged them as hard as possible. Jessica and I held each other crying,
and my body would not stop shaking. I asked if we could just stay
together, and we waited in the hall together until help came.

The
robbers stole computers, passports, tents, thousands of dollars,
cameras, clothing, packs and other things from my team. We are now
staying at a guarded house about 30 minutes from the incident. The last
few days has been hard on our team. Grieving the missing items,
replacing passports, reliving the traumatic situation, and moving
forward is a unique process. We have all been processing this situation
differently, but we are all moving forward.

One morning while
journaling about the event, I was wondering how the men did not get
through to our room. They had thrown a cement block through the lower
panel of Trevors door. If they had done that through Jenae and I’s
door…we would have been either severely injured or killed because of
the way our bodies were holding the door shut. I then remembered
something that had happened earlier that morning. When I was sick, and
everyone prayed for healing over my body…God had said to me ” Jessi,
pray over your room.” I thought this was weird, what did this have to do
with my illness. I asked Jessica to come into my room that morning and
we closed the door. She prayed over the room with me and said ” I seal
the doors and windows in this room, no evil can enter the room in Jesus
name.”

A few hours later, evil was trying to enter the
room…and no one did. God protected us, and was faithful in answering
our prayers. Not one hair was touched on one of my teammates. Our
contact David told us that this happens a lot, and often times…people
are killed. However, our lives were spared.

You begin to look at
life differently when it is so close to being taken away. I am still
working through the situation, praying that the flashbacks end. However,
I know now that my life will never be the same. Life just seems,
well…worth living.