The kingdom is coming (faster than you realized) 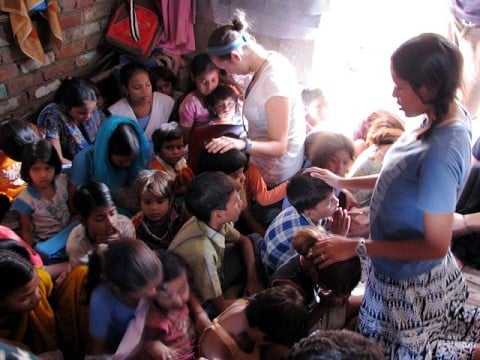 The world is getting brighter, not darker. The kingdom of God has been coming with ever-increasing force ever since Jesus’ first proclaimed its arrival. The Gospel of Jesus is spreading like wildfire ever faster around the globe.
The past one hundred years were truly dramatic in the history of the Great Commission. More peoples heard and responded to the gospel in the 20th century than all-previous centuries combined. Here are some statistics from the September 2009 issue of Missions Frontiers.*

The advance of the gospel over time
In A.D. 100 only one in every 360 people was an active believer. That ratio has steadily dropped as the initiative of the Holy Spirit continues to accelerate the expansion of Christ’s kingdom!

How many have heard?
Approximately 16,000 peoples that have embraced the Gospel. 4 billion people live in these “ethne.”
• Christian Believers – 800 million have been born again into a personal relationship with Jesus Christ.
• Other Christians – 1.37 billion who consider themselves Christians because they come from a Christian culture.
• Culturally near non-Christians – 1.8 billion are not yet Christians but live in a people where a viable, indigenous church movement has been established.

At a minimum level, an estimated additional 32,000 missionaries are needed to engage the least-reached population segments among the world’s 8,000 unreached peoples. Well over half of these will come from countries other than the U.S. Assuming an average church size of 100 persons, we only need one new missionary from every 250 churches in order to send out the additional 32,000 that are needed!

Prayer needed
Prayer is something that everyone can do. Assuming the “hour a day” rule, a church of about 50 praying members could readily supply the prayer support for an entire team of four missionaries if they only prayed 5 minutes a day.

“And this Gospel of the kingdom will be preached in the whole world as a testimony to all nations (ethne), and then the end will come.” Matthew 24:14
(“Ethne” is the Greek word translated here as “nations.” It means peoples or tribes rather than countries.)
*Taken from “Amazing Countdown Facts”