The slow poison of a same place

We just visited our friends Mike and Terri Nicholaou in Virginia. They have a neighbor lady with an attitude who presides over her section of the neighborhood with a subtle form of terror. She lobbied the city and had it erect stop signs for no good reason in front of her house. And now she wa…
By Seth Barnes
23 April 2007, 12:04 am
By Seth Barnes
23 April 2007, 12:04 am

We just visited our friends Mike and Terri Nicholaou in Virginia. They have a neighbor lady with an attitude
who presides over her section of the neighborhood with a subtle form of
terror. She lobbied the city and had it
erect stop signs for no good reason in front of her house. And now she watches the drivers-by like a
hawk.

The other day Terri pulled up to the stop sign and her
neighbor was standing there watching.
Terri rolled down her window.
“Did you want something?” She
asked.

Her neighbor congratulated her, “Now

that was a good stop.”

Terri thought, “I can’t believe your life is so small that
you’re worrying about people stopping at a stop sign.” 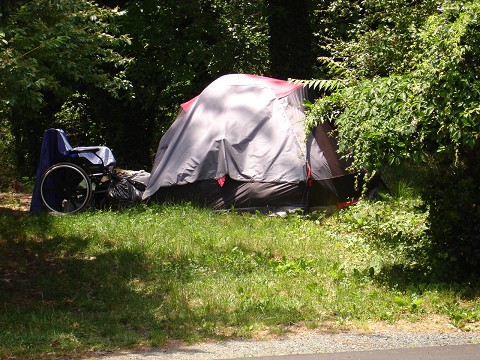 Such odd behavior makes me ask what caused her to morph over
time from a young girl into someone who resembles a kind of a troll under a bridge barking at
strangers? And what is it that turns a
person into a kind of a Gollum where the thing or place they possess becomes
“their precious”?

I believe it’s because of a phenomenon I call “the slow
poison of a same place.” Time spent
caring for and worrying about a place will eventually corrode our souls, turning us into Citizen
Kane trapped in our castle, so that eventually it can be said that we no longer
possess it, but

One of the best examples I ever saw of this phenomenon was a
neighbor who, rather than allow the bank to repossess her house, blew it up,
and years later lives in a tent in front of the ruins. Karen and I drove by her place today and her tent
and wheelchair are still there (it’s been more than 20 years).

There is an application of the “slow poison of a same place”
to the life cycles of religious institutions, whether they be churches, colleges,
or seminaries. One reason institutions die
is because of the phenomenon of squatter’s rights. People who stay in one place for a long time
begin to grow stale in their thinking.
They begin to start generalizing from their limited experience to all of
life. They stop acting like stewards and
start arrogating to themselves ownership rights they don’t have.

They succumb to the slow poison that has the potential to
eat away at any of us who fail to pay attention to Jesus’ words not to worry
about stuff or to follow the example of one who had “no place to lay his head.”

Some of us need to look at the places that we’ve been haunting for a while and ask if we could easily give them up, or if perhaps they’ve become little idols. Those of us following Jesus must never allow the sameness of a place to become a source of complacency or to begin to corrode our willingness to do anything for him.

Tomorrow’s blog builds on this theme.