Throw them in the deep end 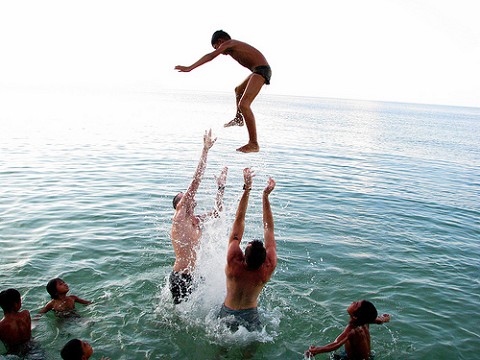 Here’s a thing Jesus did with his disciples that we don’t do nearly enough in America: He threw them in the deep end.
His disciples hadn’t been with him very long. They’d watched him do the stuff, heard him preach a few times. And then he said, “Now you go do it.”
Think about it, no seminary education, no detailed curriculum. Just him preaching the sermon on the mount, healing a few sick people and then, boom! Off you go. Here’s how it reads: “When Jesus had called the Twelve together, he gave them power and authority to drive out all demons and to cure diseases,  and he sent them out to proclaim the kingdom of God and to heal the sick.” (Luke 9:1-2)
How is it that we’ve lost this ethic? Maybe it’s our risk-aversion, maybe it’s our over-intellectualization of the faith. Whatever it is, you just don’t see this happening much anymore.
If there’s a secret to AIM’s ministry, it’s this, “throw-them-in-the-deep-end-of-the-pool” ethic. I don’t know, maybe we’re too A.D.D.; maybe we’re not disciplined enough to stick it out in the classroom, or maybe we’ve got authority issues and want to see if the stuff Jesus talked about really works.
The deep end looks like the sex-trade in Cambodia.
The deep end looks like the AIDS epidemic in Swaziland.
The deep end looks like human trafficking in Moldova.
The deep end looks like a garbage dump in Mexico.
The deep end looks like you bringing peace to your family.
The funny thing about the deep end is that when you jump, you think you’ve left everything that’s solid and predictable and you think that you may well drown. But when you sink down into the water and begin to look around, you see that Jesus is already swimming there right alongside you.