We Have Too Much Stuff 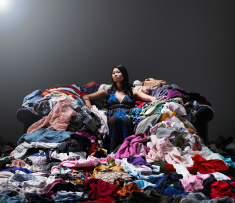 Do we have too much stuff? Here are some facts from the blog Becoming Minimalist:

Yes, this list by itself is overwhelming. But it gets worse. Put in the context of what Jesus said to his disciples, those of us who have allowed our culture to sweep us along are in disobedience.

Consider the first thing Jesus said to his disciples:

“Has anyone by fussing in front of the mirror ever gotten taller by so much as an inch? All this time and money wasted on fashion—do you think it makes that much difference? Instead of looking at the fashions, walk out into the fields and look at the wildflowers. They never primp or shop, but have you ever seen color and design quite like it? The ten best-dressed men and women in the country look shabby alongside them.”

“What I’m trying to do here is to get you to relax, to not be so preoccupied with getting, so you can respond to God’s giving. People who don’t know God and the way he works fuss over these things, but you know both God and how he works. Steep your life in God-reality, God-initiative, God-provisions. Don’t worry about missing out. You’ll find all your everyday human concerns will be met.” (extracted from Matt. 6:19-33)

If you’re tempted to rationalize all that, consider another thing Jesus said:  “If anyone loves me, he will obey my word.” (John 14:23)

So here’s a question in parting: Do you need some lifestyle changes to better sync up with the life that Jesus preached?

If so, I recommend Joshua Becker’s blog. Make an inventory of your stuff. Start with your closets and move to your garage. You’ve read what Jesus said. Now, line your lifestyles up to match his words.