We need a scapegoat 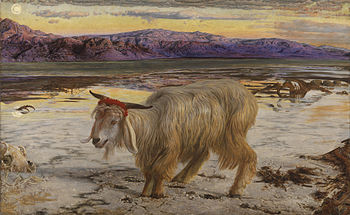 I’ve got a friend who borrowed something of mine and wrecked it. He promised to fix it, but hasn’t. It will be costly to fix. And now, every time I think about him, the word “shame” comes to mind. He’s in a bind and needs a way out.
A lot of people live in that kind of a predicament. They are in a situation where they owe more than they can pay. Maybe they want to make a relationship right, but it’s costly. They feel shame and stagger under its burden. Unconsciously, they may look for someone else to bear the burden – a scapegoat.
The ancient Jews understood their corporate need for a scapegoat. Keeping all the laws detailed in the Torah must have felt impossible to them. Every year, as described in Leviticus 16, they designated a certain goat to be the “scapegoat” that took on their shortcomings and inadequacies.
All year long, they kept a record of their sins. The sins were transferred to the Tabernacle through blood sacrifices. On the day of Atonement, all those sins were transferred to the scapegoat. It was ritually expelled from their flocks as a sacrificial ritual of cleansing. And then they were free. The poor animal was then sent into the desert to die and the Children of Israel were cleansed of sin.
The problem with a scapegoat is that you always need another one. Every year your shortcomings pile up before you. How many people do you know carrying around their shortcomings like a big, overstuffed pack? Like my friend, they live in a shame-filled land and need a release – a scapegoat of some sort.
On Good Friday, we inheritors of the Jewish tradition mark the transferring of our inadequacies to the ultimate scapegoat, Jesus Christ. It was a horrible and heroic act, an act predated by hundreds of years of Jewish practice. It’s a practice validated by modern psychology and our own experience. It buys us freedom.
I can’t imagine living any other way but free. I’m so thankful that my scapegoat is not a product of artifice or my own victim status, but a construct thought up and executed by God himself so that I wouldn’t be separated from him.