WWJD? Confronting a pervert in the Philippines 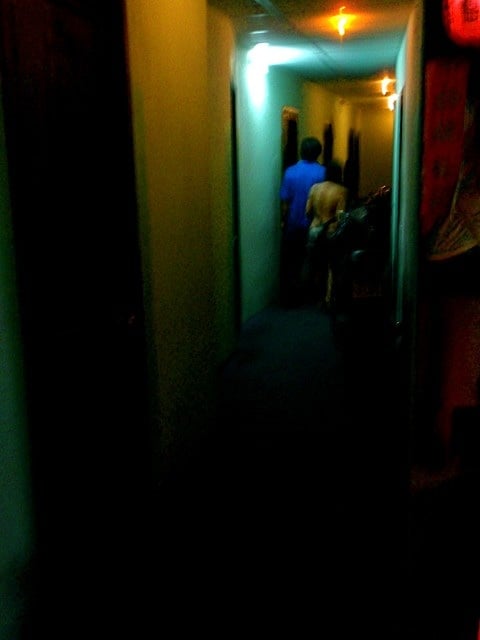 There he was, a man in a pink t-shirt.  I saw him walk over to my table in his distinct stride.  He made me uneasy and I didn’t even know his name.  He was bald and American looking, but dark all the same.  I sat clicking away at my computer as one of our guys played nice with him.  He answered all the getting to know you questions, but failed to answer why he made me squirm.  He seemed lost but normal.   He was from the states, hadn’t been home in a few years and bounced around from country to country throughout Asia.  He didn’t say specifically why he liked the Philippines the best, but I had an idea.  Our hostel where we both stayed was right smack dab in the middle of the Red Light District.

As the night went on my uneasy feeling was satisfied with proof of why he made me squirm.  Mr. Pink Shirt brought a few Asian women to our table.  His control over them bit at me like a shark.  In his repitour of women, there was a young one probably around 16 years of age.  She was beautiful and innocent.  He said to her, “I am getting you drunk tonight.”  She sank back in her chair as her olive skin blushed red.  She begged for escape, “I’ve never been drunk….please.”  My heart broke.

When Pinky got up from his throne to refill his wine glass the girl tried to leave.  He caught her and in a creepy sicko voice he said, “eh, eh, ehhh…”  I wanted to scream.  I wanted to castrate him.  I wanted to put a mirror up to his face so he could see the disgusting person that he had become.

I prompted the Lord, “Tell me to do something.  Right now.  I’ll do anything, just SPEAK!”  …Nothing.  I couldn’t take it anymore.  I pulled my chair out, (half tempted to pick it up and slam it over his head) and dismissed myself.

The next morning I woke up early.  My knees hit the ground and my fury was unleashed.  Just as I did in the beginning of the month with the two small boys in the garbage pile, I begged for the answer to my question.  Are you going to allow me to be a missionary that does absolutely nothing!  His answer was not the one that I was hoping for.  Instead I heard him say,  “Don’t touch him, he’s my son and I love him.”
I was flabbergasted.  How could God take the side of this heathen rather than the vulnerable 16 year old that didn’t know how to defend her innocence?  As I continued to pray and try to grasp God’s tenderness towards the man I was taken back to my own past.  It was as if God asked me, “Where do you think I was when you were doing “that?”  “Don’t you know that I was with you?”   “Don’t you know I loved you as much then as I do now?”  My anger towards Mr. Pink Shirt suddenly subsided.  That is until I saw him again two days later and he had changed his pink shirt to another one that said “Ultimate Sex Champion” on the back of it.

Forgetting my previous prayers, my judgments persisted and Mr. Pink Shirt/Ultimate Sex Champion became my nemesis.   Before I knew it the promises of scripture started unveiling themselves in my life.  “In the measure you judge you will be judged.”  Ouch.  Judgment is like a weed that fertilizes other weeds.  It breeds all kinds of tangled things like bitterness, resentment and the like.  The Holy Spirit was like a dripping faucet or the neighbor’s dog who you would love to muzzle.  Nagging, nagging, nagging, refusing to let me just judge.  Asking me to forgive him.  Asking me to forgive the men that have burned me in the past.  Asking me to forgive myself.  This man’s constant presence, always there, always birthing thoughts…Drip, drip, drip.   Then, suddenly out of nowhere he disappeared.  Ahhhhh, his refreshing absence.

It turns out that Mr. Pinky had an ear infection, so he stayed in bed for 3 days.  None of us saw him, in fact we thought he left.  But he had returned and there he sat, now in a blue shirt on the couch.  Then, just as unwelcoming as his presence was to me, a still small voice spoke softly, “Go apologize to him.”    Gulp.

I sat with my laptop in my lap as if it was going to hide me.  My skin,  I am sure. had already dressed itself in a blotchy color that would no doubt disclose my true nervousness.  I sat next to him on a black leather couch for about an hour until this ridiculously cheesy Wesley Snipes movie that he was watching had finished.  The credits rolled, along with the sweat proceeding from my pores.  Another gulp.  Another whimper to God for one last assurance that I had really heard him correctly.  It was a go.  Remote in hand he changed the channel to “American Dad.”  Great, I thought.  Now I have to sit though this stupid show to tell him that I am sorry for judging him.  My stomach burned.

I couldn’t take any more of the show so I decided to Michael Jordan it and Just Do It.  I turned towards him and realized that I didn’t know his name.  Rats!  He turned towards me and all I could think to say was, “Have you ever been apologized to by a complete stranger?  Nice, Marisa.  Nervously I moved the hair out of my face and tried to use my other hand to cover the blotchiness that I am sure had made its way up my neck. I explained to him that when I first met him, I despised him for how he treated the women.  I probably could have left some of my feelings unspoken but they seemed to fall out before I could stop them.
He chuckled courageiously at each blow. I told him how I prayed and God told me not to touch him, that he was his son and that he loved him.  Somehow I found the kahoonas to look him straight in the eye as I apologized.  I made sure that he knew that I was sorry for judging him when in fact it wasn’t my place, and if the God of heaven loves him, who am I to want to castrate him.  Yes, I think I did use that word…probably could have used another vocabulary word…. I ended with my heart on a platter.  I told him that we were the same.  Any sin that he could ever think to commit was the same as one that I have probably already committed because sin is sin.  But, in that  God loves us both no matter what we’ve done.  I had said that phrase many other times in many other ways, but never with such sacrifice and conviction.  We left each other on a good note and that was it.
As you read my blogs I think you will clearly find that I am searching.  I am at a loss as to how I find the courage to click the “make public” button each time I write the confessions of my heart.  But something tells me that I am not alone in my journey.  Perhaps there are others that would somehow benefit from my ramblings.  Maybe they would be encouraged to get real.  So that is what I have done.  In a sense I have thrown out all my religion and theology in search for a faith that is as pure as gold.  In that I am not surprised that my first stopping point was in the dumps—where the lowest of the low hang their heads, nor that I am staying in a hostel that has planted itself on a street inhabited by sex and prostitution.
My Lord has positioned me to sit at a low place so that he can show me the depths of his heart.  The lesson I am learning:  The gospel begins with Love:  Unyielding, unending, relentless, aggressive, passionate, love.   Oh what a thick skull I have, what a resistant heart.  God forgive me.