A Cambodian who refused to die

The halls of this place
were once bustling with enthusiastic adolescents who were eager to
learn and excited about making a difference in their world.  this high
school became a main setting for detention, interrogation, torture and
killing after being overtaken by order of pol pot in april 1975.  over
the span of four years over ten thousand innocent people came through
the doors of this concrete hell.  only seven people walked away from the
torture chambers that should have been an inevitable death.

Chum Mey is one of those people. 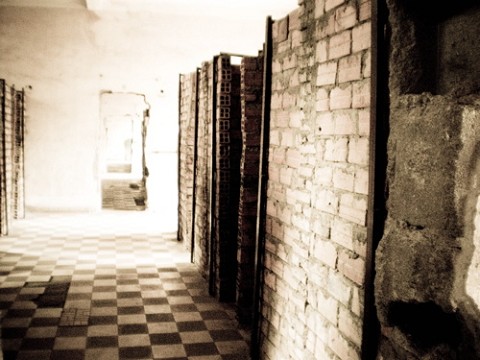 As we were walking up to building c of the prison campus today we
noticed an elderly cambodian man.  we asked him why he was there and he
told us that he is one of only three survivors who are still alive.  he
visits the prison periodically to tell his story in hopes that people
will never forget about the cambodian genocide.  as we continued talking
to mr. mey he recounted his story to us and was gracious enough to
answer all of our questions.

He and his wife were taken captive in 1978 by the khmer rouge regime.
he was split up from his wife and put into the torture chamber we stood
in today.  he was held captive there for four months before being
rescued by the vietnamese army.  during his time in the torture chamber
he was confined to a small brick cell with nothing but a small box to go
to the bathroom in.  he was given only two small handfuls of rice
porridge each day.  his hands and feet were shackled while he was
beaten.  if he made a sound they would beat him more.  he told us of a
time when his back was so swollen from the beatings that he couldn’t
bear to have it touch anything.  he tried to sleep sitting up but the
guards made him lay on his back, forcing him to endure the excruciating
pain.  all he could do was cry silently.  screwdrivers were lodged into
his toe in an effort to pull it off.  he was given electric shocks twice
everyday and as a result is blind and deaf on his right side.

I have never before heard firsthand of such brutality and malice.

As i stood listening to mr. mey’s testimony i was overwhelmed with
compassion and love for him.  we told him that we are christians and
that we wanted to share the love of christ with him.  we offered to pray
for him and he obliged.  and before i knew it there we were.  fourteen
jesus-loving westerners praying over one cambodian-buddhist. 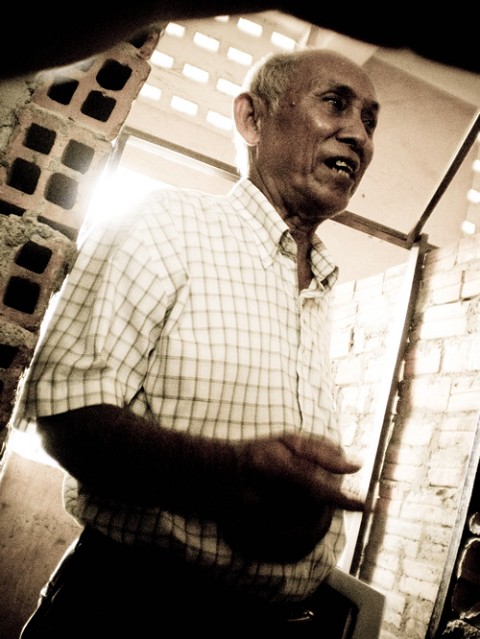 We prayed over him in the same cell he was once
tortured in.
if that’s not redemption, i don’t really know what is.
When we had finished we shook hands and began saying our goodbyes.
fire didn’t fall from heaven and no one busted out of the prison cell
this time around.  but the air felt thinner to me.  the spirit of god
was resting in a place where maybe it never has before.  mr. mey had an
encounter with the one true god today, whether he knows it or not.  my
prayer is that the lord would continue to encounter him and speak to him
and save his soul.  that jesus would capture his heart and anoint him
to bring the good news, to heal the broken hearted. and from one to
another, truly set the captives free. [is. 61]