An amazing, historic day in Haiti

We didn’t expect this. We expected the devastation, the crumbled buildings, the tent cities. But we didn’t expect the hope.   We arrived in time to witness something I’ve never seen before – the pastors of Haiti called for three days of prayer and fasting and the people responded. &nb…
By Seth Barnes
13 February 2010, 12:02 am
By Seth Barnes
13 February 2010, 12:02 am 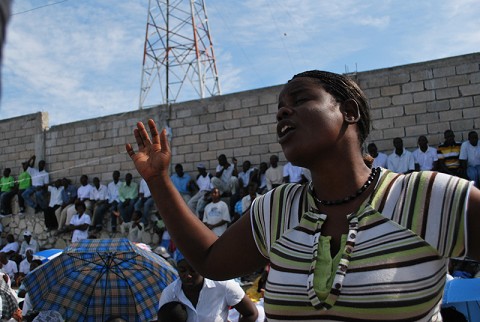 We didn’t expect this. We expected the devastation, the crumbled buildings, the tent cities. But we didn’t expect the hope.
We arrived in time to witness something I’ve never seen before – the pastors of Haiti called for three days of prayer and fasting and the people responded.
Everywhere we went this morning, under tents, under trees, in the squares, in the rubble, were gatherings of people praying and singing.
We drove to a gathering our translator estimated to be 6,000 people. A man was at the front talking. As he stopped and as the people began to sing and to wave their hands, we could feel the Spirit of God blow over the crowd and through our hearts. You talk to any one of them and they have lost someone. Maybe a wife, maybe a father or a sister. But here they were, worshipping.
As I walked through the crowd a man said something to me in Creole. Not understanding, I kept walking. He said it again – I could tell he wanted an answer. I looked at my translator and he said, “He’s asking you, why aren’t you clapping?” It was true. Me, the American, the outsider, the reporter, watching. It wasn’t appropriate. The people were there to respond to what God is doing in their land. God is pouring out his Spirit and the appropriate response is clapping for starters.
In every church that hadn’t fallen down, in almost every open area, people were gathered in crowds that spilled out into streets, praising God, singing and praying. And it demanded a response – engagement. I suppose it’s like heaven in that way. If the angels are praising God, we’ll be compelled to join them.
Later we walked by the front of the now-collapsed Presidential Palace where hundreds of thousands gathered to worship. The crowd was beginning to disband. And at Pastor Christian’s church, an estimated 9,000 sat on the ground under drooping blue tarps. Somebody saw me in the back clapping to the music and asked, “Why aren’t you dancing?”
Back in the van, we drove through the city center, overwhelmed by the devastation. Tent cities were everywhere. Some highly organized in new, white half-cylinders from the UN or USAID. Others, ramshackle, made of rags, sheets and scraps of plastic. A large train terminal, impressive for its colonial architecture, sat at a cockeyed angle – leaning precariously. Some of the buildings had collapsed forward into the street, poised like barges being launched from docks.
We passed people in shoving, angry lines waiting for large white bags of flour. Everywhere, people here are on the move, trying to find a way to survive – negotiating a world turned upside-down. But the crowds who came to pray, the Haitians who by the hundreds of thousands spread out from every still-standing church and meeting tent on what seemed every other street corner testified to another reality.
Something spiritually historic is underway. The cry of a desperate people is rising up to the heavens – calling out for mercy, crying out for God, shouting out for the arrival of the soon-coming king. And, today at least, God responded. His Spirit blew through the tents in ways that sent you to your knees in response. In 30 years of missions, I’ve never seen anything like it. It’s the thing you read about it books. It’s the thing you hope for but sometimes grow cynical about ever seeing. And it’s happening here, now.
Haiti is arising – a month after the greatest natural disaster of our time, a new and hope-filled day is dawning.
Follow more from this trip on Facebook (you don’t need to have an account to read the different reports). Below is a video report from me (for more of these videos from the team, visit Clint’s blog.) You can also sign up for prayer updates from Haiti.