At ground zero during the earthquake

He began asking God, “Is this it?  Did I really come to Haiti to dig latrines?  Will you show me what it is you have for me here?”

January 12th, 2010 began like any other day.  That afternoon, Steve was playing soccer with some of the locals.  During a break in their game, the sky began to turn black.  A large flock of birds flew into the sky blotting out the sun.

Suddenly, the earth beneath him sank. Then, it violently trembled and quaked. Screams echoed from the surrounding mountains.

The ground moved as if it was an ocean wave cresting. It tossed people up into the air.  One of his translators was thrown into the air and into another man who was thrown by the earth.

He saw a number of people on the ground lifeless and covered in blood.

As he left, he saw one small girl trapped under a wall that had fallen on her. 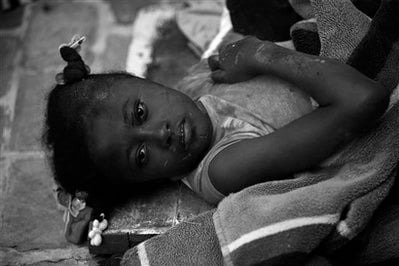 Knowing something had to be done, Steve prayed for supernatural strength to lift it off her.  When he couldn’t, he tried to pull her out. But with each tug, the girl screamed.  When an aftershock came, he knew he had to get away from the buildings and ran off. When he returned, he saw that she was still alive.  He drew close to her again and  she clutched his arm, afraid he’d leave.

So he sat with her.  He cradled her head in his lap, held her close and looked into her eyes. He cried hot tears for her, his heart beating, scared to stay with her, scared to leave.

Eventually he had to leave her for the night. And when he returned in the morning, he realized with shock that she was dead.

In the ensuing days Steve saw children with missing arms screaming for their mothers.  And as time passed and the earth stilled from shaking, his dreams were filled with blood-stained memories that kept him up at night.
_________________________

After hearing his story, we prayed for Steve. He was still sorting through what he’d experienced, wondering why this had all happened and where was Jesus in the midst of all the pain. He’d gotten angry and raged on God.

As we prayed for him we saw that Jesus had in fact been there in the midst of the horror. He’d been walking amongst the terrified people. He was there praying for them. He was there beside that little girl; he held her head in his lap, and he prayed for her as she lay dying.