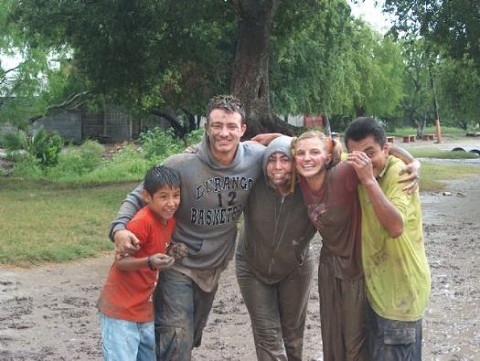 He liked to laugh, he liked to be intense. The last time I talked to him in May he asked me how I
was and I told him I was “Loving life!” “That’s what I like to hear!!”
he said back.

He would swing dance with me, pray with me, try pick up lines on me
(which I hated), argue with me about whether or not drinking was
biblical, and would even let me cry on the phone with him when I needed
to at 2am in the morning! He gave like he would never run dry. He
nicknamed me “Fuerte” while in Mexico.

Craig would always ask me how Leah was doing, because he knew I was burdened for her. When I was nannying in Colorado he drove five hours to come see me. He danced with little Gracie Davis, and laughed when she said, “Dance with me, boy!”

One time he and I decided to try to live off of ten dollars a week between the two of us, so we could see how life was for the Mexicans. I lasted one day and he never stopped giving me crap for that. When in Dallas, he took me out to a nice dinner and bought me flowers and an orange gorilla that I named OG. Afterwards he would always ask if OG was doing ok when he called.

I used to joke that I wanted to marry an Irish man.  He would act disappointed and say, “That rules me out” since he is half Mexican. Last year he texted me saying, “Guess what! My name is Scottish (close to Irish) and it means rock!” I then let him know that I would make an exception for him – all in good humor of course. 🙂

Craig was a rock, to the core. He loved and lived hard. He poured his life out into the youth in his area and was sold out for Durango, Colorado. We used to call each other and sing the song “Here I Am Once Again”  to each other. Craig couldn’t sing at all, but he tried. 🙂 While in Mexico on a mission trip he tried to teach me the song.  We had no recordings of the song, just the notes, but he taught me it until it sounded halfway like how he remembered it. After that he would always make fun of me, saying I never played it how it was actually supposed to be played.

Heaven just got a whole lot more exciting on July 21st. I can’t wait to see Craig’s smile again, or to hear him make fun of my laugh. And hopefully he’ll still have some bling bling on his ear and be acting like the big shot that he was.

Here i am once again
Here I am,
once again
I pour out my heart
For I know that you hear
Every cry
You are listening
No matter what state my heart is in

To say that you’re wonderful