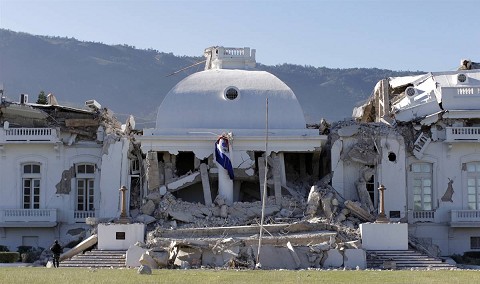 Here’s a little known fact: Three months ago (November, ’09) the pastors of Haiti had a national meeting. They prayed for revival. They prayed that God would shake their land. They prayed that he would tear down the strongholds in government – the evil forces in the judicial system, the presidency, and the corrupt politicians.
They believe that something was transacted in the spiritual realm.
When the earthquake happened, the pastors believe that it was the physical manifestation of a pre-existing spiritual reality. They believe that it was a direct answer to prayer.
In downtown Port-au-Prince today the presidential palace lies in ruins. The supreme court is a pile of rubble, and thousands of corrupt politicians were removed from power as their buildings fell around them.
The spiritual atmosphere of the country is completely different now. Voodoo priests by the hundreds have given their lives to Christ. But the pastors of the country believe it didn’t happen because of the earthquake, the earthquake was in some way a physical reverberation of a spiritual transaction that took place in November.
It’s a remarkable, paradigm-shifting thought for those of us in America who are locked in a paradigm of linear sequential, cause-effect reality. It made me think of Jesus’ last moments on earth as described in Matthew 27:51. After he gave up his spirit, “The earth shook and the rocks split.” In other words, an earthquake.
When we read that passage, we have no trouble seeing that the spiritual reality resulted in a physical reverberation. Why should Haiti be any different? We’re not human beings having a temporary spiritual experience, we’re spiritual beings having a temporary human experience.

A paradigm shift is always hard to grasp. A fish can’t see that he’s breathing water. Consider the possibility that the Haitian pastors have grasped reality and that our western worldview is what’s really broken.