God made us to party & fight 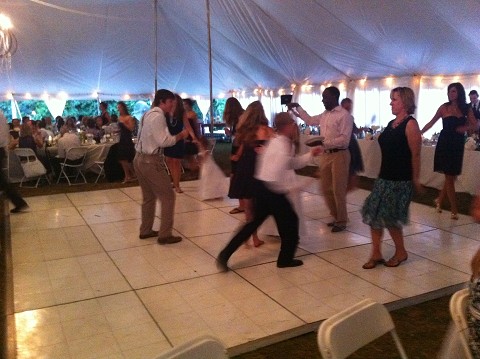 We’ve completed our fourth after-party on the heels of Talia’s wedding and I think it’s biblical. There was the debrief party, then the brunch party with the in-laws and friends, then the clean-up party, then the “help us eat and drink all this extra stuff” party. And tonight we may just do it again on Jeff Hylton’s boat.
When David was building the kingdom of God in Israel, warriors and their families came to him from all over the country. They had particular battle skills. Most may have been shepherds and farmers, but they were pretty good with a shield and a spear.
They were loyal to their tribes, but didn’t know one another, so the first order of business was not to march and drill, but to build trust and esprit de corps. So David ordered up a big three-day party “for their families had supplied provisions for them…fig cakes, raisin cakes, wine, oil, cattle and sheep, for their was joy in Israel.” (1 Chron. 12:39-40)
The party wasn’t just an evening. It was a messy knock-down, drag-out affair that kept rolling day upon day until warriors felt like brothers and they began to catch David’s vision for a nation. After an experience like that, they made short work of the Philistine army that came up against them.
Before Jesus began his three-year campaign of laying waste to the enemy’s kingdom and establishing his own, he extended the festivities at a wedding party by producing about 700 bottles worth of really awesome wine. (1 John 1-10). And when he is done fighting for his kingdom some day in the future, he plans on having another wedding feast like it. (Rev. 19:7-9)
I grew up with a brand of Christianity that is puritanical, that doesn’t know how to dance and wouldn’t be caught dead trying to do what Jesus did with the wine. I heard one of our pastors once try to show through his powers of biblical exegesis that the wine didn’t have any alcohol in it.
Thankfully, that sad version of Christianity is withering in America. People who preach an up-tight, sterile version of the faith don’t know the great joy that extended, God-honoring, community-wide celebrations can bring, and they consequently are ill-equipped to fight to establish his kingdom.
My children’s generation may not know the Bible verses, but they know in their spirits that great parties are righteous. We need them to bolster our spirits and prepare us for the heavy-lifting of the battles God has also ordained in our future.