Helping the poorest of the poor: a success story

Julie Anderson had been leading short-term teams with AIM for eight years. She felt God calling her to commit to a country and a people – Swaziland. Not long after moving there, God asked her to adopt a precious little Swazi baby girl named Nosipho. Julie was committed. Swaziland’s 44% HIV infec…
By Seth Barnes
16 March 2007, 12:03 am
By Seth Barnes
16 March 2007, 12:03 am 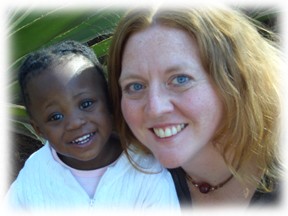 Julie Anderson had been leading short-term teams with AIM for eight years. She felt God calling her to commit to a country and a people – Swaziland. Not long after moving there, God asked her to adopt a precious little Swazi baby girl named Nosipho. Julie was committed.

Swaziland’s 44% HIV infection rate has decimated the Swazi family. Saturdays are set aside not for recreation, but for funerals. The last remaining hope for the orphans who have been left behind are the grandmothers (known as “go-go’s”). The problem is that the average go-go has no job, no way to care for their children.

A year ago, Julie felt God asking her to help the go-go’s find away to generate income. She thought about a variety of businesses that would allow them to make something for sale. Eventually she and the group of go-gos she works with decided to make purses that they could export. They tried a variety

of styles and fabrics, eventually settling on a design that looked distinctively African. They sold them to short-term mission groups for $15, of which the go-go kept $6.50.

Much to Julie’s surprise, the bags began to fly out the door. Our short-termers filled their suitcases with the purses and gave them as gifts. Some of them have become distributors back in the states. The demand has been overwhelming. In response, Julie bought a bunch of sewing machines
so they can make them faster. She has trained 45 of the go-gos, each of whom are now able to meet the needs of the orphans they care for.

Here’s an excerpt from her blog:

These new machines mean a bigger profit for many of the women, and that each of the 8 feeding centers will have a
sewi

ng machine there for the ladies to use. Once the volunteers gather fire wood, haul water and get it on the fire to boil, they have a bit of waiting around time that will be perfect for getting some sewing done on the new machines.
The money for the new machines came partly through donations specifically for the machines, and also through some of the profits from the hand bags. We are so thankful for how the Lord has provided!

Last year at this time we were just tossing around and praying about ideas of how we could help these women earn an income.While it still seems like we have a long way to go, it is really great to see the craft co-op providing some much needed money for these women. Due to our small budget, we are still only able to pay the women after their bags have sold (rather than up front, which is a goal for the near future), but from the money that has come in so far from Christmas sales, each woman received an average of about $70 in Jan. In a country where 2/3 of the population lives on less than a dollar a day, that’s pretty good, and we recognize that this is the Lord’s provision.

The women started clapping as we brought in the machines yesterday, and later, after taking a few pictures, the women gathered around and started singing praises and praying over the machines. It was so great to them giving thanks to the One who deserves it!

Julie’s dream is to bring on management help to continue to grow the business. She was already invested in the lives of many of the grandmothers before the purse business started, but now her credibility in the communities in which she works is higher than ever. As a consequence, Swazis listen to her respectfully when she talks about how Jesus cares for all their needs. Hope is returning to her corner of Swaziland.