How to interrupt a suicide

Every week thousands of people try to kill themselves because they’ve lost hope. If you were to stumble across someone just as they were attempting suicide, what would you tell them? 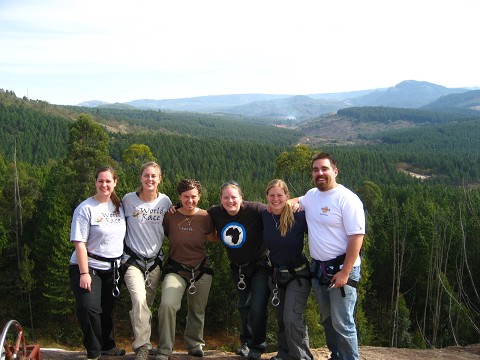 This happened a few days ago to our World Race team (Team Nessa – in the picture at right) in a remote part of Africa where the man had driven in his truck when the team encountered him. Stephanie tells it from God’s perspective and Linnea tells the story as the team experienced it:

“We put the equipment away. When we got back to the house, we ate lunch,
and then we hopped in the Land Rover and drove toward the cave.

Stumbling up dirt roads, in an extremely remote area, we came
upon a nice-looking pick up truck. As we approached, we realized there
was someone in the truck. As we started to drive
by, Trompie yells, “there’s a hose going into the car!”

He immediately
backs up, hops out of the car, opens the man’s car door, turns his car
off, and grabs the key. Scott jumped out and pulled the hose out of the
rear window, and out of the exhaust line. This man was attempting
suicide.

As Trompie spoke with the man in Afrikaans, we stood around, praying,
until Trompie told us to take a walk to a lookout. We did this and when
we got there, just kept praying… praying against the darkness, the
curses over his life, illness, and sending it to the pit of hell. We
prophesied life over this man, I said, “today he’s met God, this is his
road to Damascus (and yes, his name was Paul), he’s been given rebirth
on the day God chose to bring me into the world.”

I couldn’t help but
cry. It was a really emotional time for us all. We all prayed healing
over Paul. Then we heard a whistle.

We came back to the cars. Trompie asked us if we’d pray with Paul.
I told him, “there is no reason at all we should be up in the middle of nowhere,
except that it’s my birthday and we were having a day of fun. There’s
no reason I should be in South Africa, except that God called me out on
this trip over a year ago.”

Paul broke down as I broke down. This is
God’s grace. Not that a man should feel embarrassed about his sin, but
that we surround him and tell him about God’s great love for him. God
decided to use what Satan intended for harm, to be used for His glory!

The rest of the girls prayed, and then Scott asked Paul if someone he
knows prays for him. Paul answered that his wife must be. We found out
that his wife is a Christian, just as Paul admits to being one. Scott
explained that his wife must be doing major battle in the heavenlies
for him, because we were sent on this mission today. We didn’t have a
clue, however, as we thought we were just coming up here to check out
caves.

In the end, Trompie gave him his keys back, asked him what he should do
with the hose. Paul offered it to Trompie, and he gladly accepted it as
a reward from heaven. I looked at Paul and Trompie talking and saw a
new relationship… a father-son relationship forming. It was a work
that only God could do. Paul drove away, with a renewed hope. We drove
away absolutely in awe of what God had just done. I am grateful to God,
for my life, for allowing me to do His work, letting me be his hands
and feet, for rebirth, and especially for grace.”