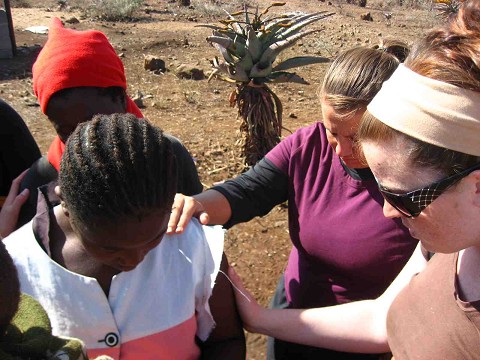 Phumzile, a shop keeper from the small
grocery shop across the street comes running into the house as if
something is after her. “Pastor, they have sent me to call you. Maswane
is very sick and they need your help”, she announces.
We immediately stop playing and
rush for the Matsenjwa homestead. We find this 19 year-old girl writhing in
pain and her grandmother begins to tell us what is wrong with her. Maswane has a terrible skin
problem. Her skin looks like a rough snake or lizard skin and has sores
that are full of abscess all over the body. I gave her antibiotics and pain tablets. When she looked calm and
settled I talked to her.
“Tell me Maswane what happened to you when you were young?” I asked.
“Pastor, I have been
meaning to talk to someone about this before I die. When I was almost
six years-old, in the year 2000, I was raped by my cousin. It
happened right here in this house. Everyone was away and I was not
schooling then. He came to the house early in the morning and he raped
me. The issue was reported to the police and I was taken to Saint
Philips clinic for examination. But to this day nothing has happened to
my cousin Zakhele. I hear he has done a similar thing to another five
year old. They even say he is now on the most
wanted police list because he raped an older woman.
Pastor, there is something
else I must tell you. Not only Zakhele raped me, but also my uncle. He died in December after a long illness.
I think I got HIV from my uncle. I have only one wish now, to see
Zakhele, my cousin, paying for his sins. My uncle is dead and I cannot
do anything about it now. However, can you help me pastor make sure the
police find Zakhele and put him in jail?”

It’s hard to stomach the reality that this is not an isolated incident.  This type of abuse happens more often than they can measure in Swaziland where the rapist is seldom prosecuted.  If HIV/Aids is contracted during the rape, the perpetrator may spend some time in prison, but it is often only a few years.

Parents and grandparents often must leave young children alone while they go find out, food, or medical care.  Their children are left vulnerable to attack so the family can survive.  They know the risk of involved of contracting HIV/Aids, but must think of the immediate dangers of starvation and other disease.  It’s an awful choice for any parent to have to make.

As I contemplate this, I’m struck with two distinct thoughts; first, I take so much for granted living in America where my biggest fear for my daughter is a skinned knee.  Forgive me, Lord.   Secondly, I’m speechless as I try to comprehend children living in that type of environment.  How could you possibly keep your daughters safe?  It’s unfathomable.

Where do you even begin to address all these issues? I really don’t know what to do, but maybe the first thing we need to do is to become aware of this tragedy.

Secondly, we need to pray.  “And pray in the Spirit on all occasions with all kinds of prayers and requests. With this in mind, be alert and always keep on praying for all the saints.”  Ephesians 6:18