Most difficult relief effort in history 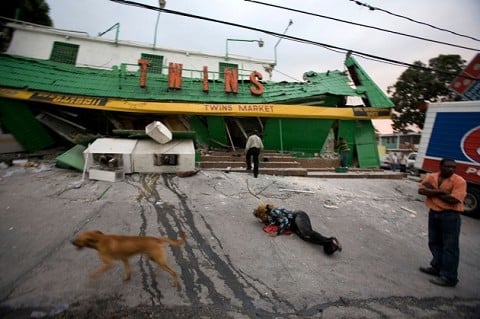 PORT-AU-PRINCE, Haiti – The relief effort in Haiti
could end up being the most difficult, faith-testing recovery from a
modern disaster, perhaps even exceeding that from the 2004 Asian
tsunami, according to United Nation officials and aid groups with
experience in large-scale catastrophes.

Haiti, already the poorest nation
in the Western Hemisphere, was barely showing signs of recovery from
the 2008 hurricane season when the earthquake flattened its capital, Port-au-Prince, crippling the country’s already weakened transportation and service delivery network.

Local aid groups that would normally help guide international efforts were damaged themselves, while the United Nations lost at least 70 staff members, and 146 more remain unaccounted for.

“You’re talking about a country that pre-earthquake had limited
resources and capability, and what resources it did have were
concentrated in the capital,” said Kim Bolduc, who is coordinating the
relief effort for the United Nations. “This context helps explain why
this emergency is probably the most complex in history, more than the
tsunami, more than the Pakistan earthquake” of 2005.

The
difficulties have confounded aid workers across the country, even those
who have dealt with some of world’s worst disasters in recent years. At
a first aid tent in the middle of a soccer field where hundreds of
people are now living in Jacmel, a coastal city that was among the
worst-hit, a French doctor threw his hands in the air.

“I am
very, very surprised,” the doctor, François Sarda, a volunteer with
Aides Actions Internationales Pompiers, said of the three days it took
the aid group to get in and the chaos he found when he finally arrived.
The group was forced to fly to Santo Domingo in the Dominican Republic
and take a boat from there. “At least in the tsunami we had some
infrastructure,” he said.

To help manage the chaos, the United
Nations and the United States signed a two-page memorandum of
understanding on Friday to formalize their roles and end the tensions
that flared earlier in the week. The United Nations had complained
about the American military’s handling of flights at the airport here,
saying critical deliveries of food from the World Food Program were being unnecessarily delayed.

Still,
the United States is known for throwing its considerable weight around
in international aid efforts, so it is unclear if the new agreement
will solve the earlier problems.

Doctors Without Borders
has complained about the American military’s running of the airport.
The group has landed some planes, but has had others diverted, forcing
it to truck in supplies from the Dominican Republic, according to
Marie-Noëlle Rodrigue, deputy director for operations for Doctors
Without Borders in Paris.

“It’s a very confusing situation and
difficult to understand,” Ms. Rodrigue said. Jason Cone, a spokesman in
New York, said much of the confusion involved who was coordinating
matters. He said airport access had improved in recent days through
direct contact with the Pentagon and the United States Agency for International Development.

The challenges faced by some Haitian
organizations are confounding. Danièle Magloire, a senior director of
Fokal, a Haitian human rights organization, began working from an empty
room in a friend’s apartment building after her own home and office
were damaged. The room still lacks electricity and water, like most
buildings in the city. Residents of the neighborhood whose homes were
destroyed camp outside on the street.

“We cannot possibly make
it alone in the struggle to rebuild,” Ms. Magloire said. “The United
Nations, with its immense bureaucracy, cannot make it alone. We need
all the help we can get, and we know that it must come from the United
States at this critical moment.”

Despite the troubles, the
recovery effort is finding better footing by the day. Though rescuers
are still hoping to defy the dwindling chances of finding anyone alive
in the mountains of rubble 10 days after the earthquake, aid workers
are shifting their focus to delivering shelter, water and medical care
to hundreds of thousands of injured, hungry and displaced Haitians.
They are racing against the approach of the rainy season, which aid
groups fear could unleash disease.

United Nations officials
said Friday that most surviving supermarkets would reopen next week,
and that cellphone service should be fully restored by Saturday, with
40 banks also reopening. Lines for gasoline have also eased, with
officials reporting that 30 percent of the city’s gas stations were now
operational and that there was no longer a shortage of gasoline.

But
problems persist bringing in diesel fuel, hobbling efforts to gear up
aid distribution, Edmond Mulet, the chief United Nations official in
Haiti, said in a videoconference with reporters.

Although
enough food is on hand to reach many more people, only 100,000 received
such aid on Thursday because of a lack of trucks and fuel, he said.

“We have the food to be distributed,” he said. “We just don’t have the vehicles.”

The
United Nations needs to bring in 10,000 gallons of diesel per day from
the Dominican Republic just to keep water trucks circulating, Mr. Mulet
said.

Ms. Bolduc is coordinating the humanitarian efforts, but
how many aid groups are now roaming the country is anybody’s guess, she
said. About 375 have registered with her office, but she says she
believes that there are many more that have found their own way into
the country and are providing relief.

American rescue teams were
among the first to experience the knot of troubles. Usually, when they
set down in a country after a natural disaster, the local government
has already identified buildings where there are known survivors so
they can race to the scene. But here, without government input, they
had to drive through the city themselves, making snap assessments about
where survivors were likely to be found.

They had trouble
getting their equipment; its arrival at the airport was delayed for
several days. Then they faced a shortage of vehicles, gas and drivers
at the United States Embassy.

“We have zero infrastructure
here,” said Louie Fernandez, one of 80 rescuers from Miami-Dade County
in Florida. “What are you supposed to do?”

Despite the
monumental obstacles that must be overcome, Ms. Bolduc said, “It’s not
mission impossible, if all the players work together.”