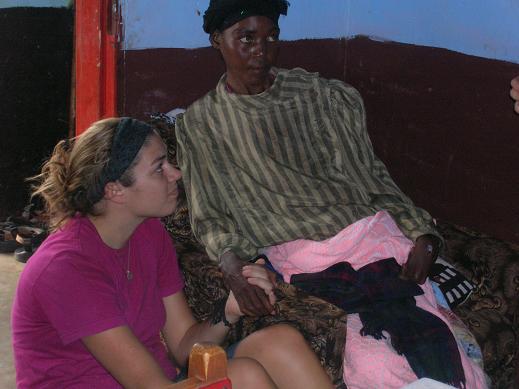 When my World Race squad was in Swaziland back in January, a few of
my teammates had the opportunity to minister to a woman named Dudu.
Dudu is 27 years old and has been living with AIDS and TB. Back in
January her situation seemed hopeless and the hearts of my teammates
broke over this woman’s condition. The loved her and cared for her, and
even spent time with her in the hospital. I never met her back then,
but heard story upon story about her. Their time spent with her was
also a process of “learning to die” with her, and understanding what it
means to minister to someone who is past medical help. They left Swazi
thinking that she would pass away very soon.

Since returning to Swazi, I was completely surprised
to learn during our first week that Dudu was still alive, living across
the street with her mother, father, sisters, and her son. When I found
out, I was completely overjoyed. I couldn’t believe that this woman who
I heard so much about in January as being on her deathbed was still
here. Her situation was still heartbreaking, spending most of her days
lying on the bed and struggling to speak, but she was still here. Our
girls struggled
a little in the beginning with how to minister to someone in her
condition, but as the weeks went by they grew in their ability to love
her and care for her in beautiful ways. I saw the Lord sustaining her
and saw it as a gift that we got to love her. Even last week, her son
turned one year old and we were able to throw him a birthday party.
That was the only time I was able to go to her house and I got to sit
with Dudu, feed her birthday cake, and hold her hand. She is so
incredibly beautiful.

Every day that the girls go to Dudu’s, they never
know what to expect. On the ‘good’ days, her family sits her on the
porch and she is able to speak a little; and on the ‘bad’ days, she is
confined to her bed and it takes every ounce of energy to eke out the
smallest of sounds. This past Wednesday, our girls went over to her
house for a visit. Dudu was lying in her bed looking so small and weak.
Even though her condition looked bad, it is usually the most common.
They sat with her, prayed with her, and read her letters they had
written for her. Though those days are hard, it is beautiful to be able
to sit with someone in their pain and let them know how much God loves
them, that they are not forgotten.

A few hours after the girls had gone to see her, one
of our translators came to our house to tell us that Dudu had passed
away. Our girls just broke. Though this news wasn’t necessarily
unexpected, we really didn’t think it would happen. There was sadness
and anger and helplessness. Having to face the reality of death in this
place is almost unbearable. To see this beautiful, 27 year old woman
with a one year old child be taken away from this world in such a
painful way is heartbreaking. Everything about it shows the injustice
and sin of this world, and being faced with it in such a real way can
be incredibly overwhelming.

In the midst of all this sadness, our role in her
life was not finished. Erica and I drove Dudu’s family, along with
Dudu’s lifeless body to the funeral home and helped her mother and
sister pick out a coffin. I don’t think the gravity of all of that has
settled in yet, but I can truly say I felt so honored to be able to do
this for Dudu. I know her life has touched so many people. Countless
teams have come through this place with the intent of ministering to
her, but I feel like she has been able to minister to them as well. She
taught them how to love and serve and understand not only the reality
of death but the beauty of praising God in the midst of it. She taught
them how to sit with her in her suffering, and love her when there was
nothing else to do. Every team left this place saying goodbye to Dudu
and didn’t know how long she had; but we were here to say the final
goodbye, knowing that the next time we meet we will never have to say
it again.  And even though it is hard to be here right now going
through this loss, I rejoice in knowing that she is in Heaven, standing
before her Father, praising His name and no longer living under earthly
pain. Her body has been restored and it is beautiful.