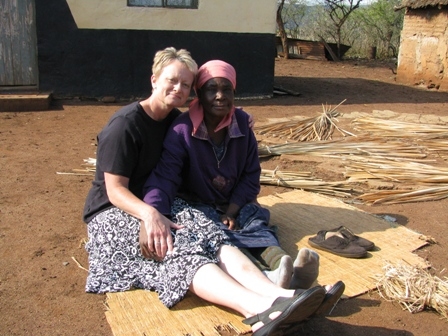 The matriarch, a wizened woman of indeterminate age, sat on the ground, her legs outstretched.  She had a pile of reeds assembled before her.  She would pick up an individual reed and strip away a thin sliver – the first step in weaving a mat like the one she sat on.  They call these grandmothers “gogos.”
As she nodded a welcome, children ran to bring small wooden stools for us to sit on.  The children then positioned themselves behind us as we sat in a semi-circle around her.
“I am Gogo Gumbi,” she said, and invited us to sit on wooden stools in front of her.
She pointed to the three children who sat nearby, “These are my grandchildren.  Their mother has died and now I raise them.”
Philele translated as we began asking questions.  “Who lives here with you?”
“What are you making?”
She answered each query patiently, but briefly, with no explanation.
We asked about her life and how she survives.  “It is hard to find food,” she answered, “but it wasn’t always like this.  Years ago, everyone had a garden.  But the rains stopped coming.  Now the sun scorches everything we try to grow.”
With food so  scarce and goats so abundant, we asked if they used goats milk.  The gogo looked startled and the children erupted in laughter—deep belly laughs.  Milk a goat?  How absurd! Collecting themselves, the children explained that no, they do not milk goats.  But they DO know that goat milk is good for people trying to quit smoking!

As she answered our questions, her face was impassive, her voice almost a monotone.

Then I asked, “What do you believe about Jesus?”
It was a simple question, but it opened a door.  She shared about the pain of losing her husband, siblings, and several of her children to death, but how Jesus carried her through and gave her both comfort and hope.  She opened up to share her grief, and as she did, her voice wavered and tears began to fall.  Patti responded by going to sit with her on her mat, touching her.  There was a bond that transcended physical touch.
Gogo Gumbi indicated with
her chin out the grave sites of her family members buried just behind the huts.
“Can we go
there?” I asked. I suggested that we offer a blessing for the memory of her two daughters, so we all walked over.   She replied without words, drawing herself upright and walking to
the area marked by stones.  There she knelt on the ground in front of the
graves and moaned.
We prayed. I suggested we sing a song.  Patti led, “It is well with my soul.”  Philele guided us through the next verse in the Siswati language.
Gogo Gumbi wept, we all prayed and sang, and it was indeed well with our souls.